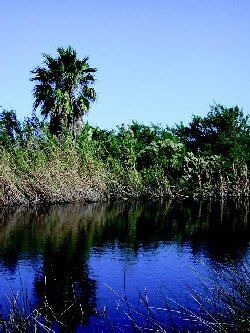 Located on the west end of Galveston Island, this 6-acre sanctuary was donated to Houston Audubon in 2001 by Dr. and Mrs. George Clayton for use as a bird sanctuary. They named it Dos Vacas Muertas in memory of the dead animals they'd found on the property after Hurricane Alicia. Open to the public, it contains a pond lined with cane, a small spartina marsh, coastal grassland with cord grass and a woodlot of live oaks. A water drip has been added in front of the two benches. The sanctuary contains flat sandy beach habitat with adjacent wetlands with access to West Bay. Please note that vehicular access to West Bay is not allowed.

Directions: Take I-45 South to Galveston's 61st St exit. Turn right onto 61st and proceed to Seawall Blvd. Turn right on Seawall and go approximately 15.6 miles to a dirt road on the right, named "Sea Bird Drive". Sea Bird Drive is before Sea Isle and an outboard motor shop. It is shortly past Sunset Cove Subdivison. Drive down Sea Bird Drive to the sanctuary turnstile entrance.

Photos
Go to Previous SlideGo to Next Slide