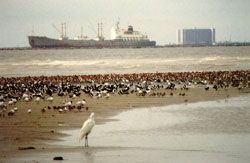 People are constantly making changes to the face of the land. Bolivar Flats records the story of people creating a positive change. The 5-mile long North Jetty, built by the U.S. Corps of Engineers, and completed in 1898, is the reason that today thousands of birds have this place to feed, rest and build their nests. The jetty was built to protect the mouth of Galveston Bay. In doing so it diverts the currents that parallel the coast causing sediments to drop to the bottom. The Bolivar Flats Shorebird Sanctuary consists of salt marsh, beach and uplands that were created as these sediments accumulated. As sediments continue to accumulate, Bolivar Flats continues to grow.

Bolivar Flats Shorebird Sanctuary on the western end of Bolivar Peninsula in Galveston County began with agreements with the General Land Office and Galveston County in the late 1980s that allowed Houston Audubon to establish the sanctuary and close the beach to automobiles. The 1,146.35 acres that make up the sanctuary today were acquired in a number of transactions. The first acquisition was the purchase of 178 acres (Suderman Tract, 1997), followed by a donation of a 4/7 undivided interest in a tract of land from Houston businessman Lewis Tyra, given with the restriction that it be used as a wildlife sanctuary. A partition agreement with Houston Audubon and the owners of the 3/7 undivided interest in 2002 led to full Houston Audubon ownership of the present 353.35-acre Tyra Tract. In 2001 a major addition to the Bolivar Flats Shorebird Sanctuary was made with the purchase by Houston Audubon of 615 acres (the Burkett Tract) through the U.S. Bankruptcy Court. A major fundraising effort led to support for that purchase from National Fish and Wildlife Foundation, Shell Marine, Houston Endowment, and hundreds of individual donors. Efforts to acquire further small adjacent tracts have continued. Bolivar Flats is a Globally Important Bird Area, the highest designation, and an International site in the Western Hemisphere Shorebird Reserve Network.