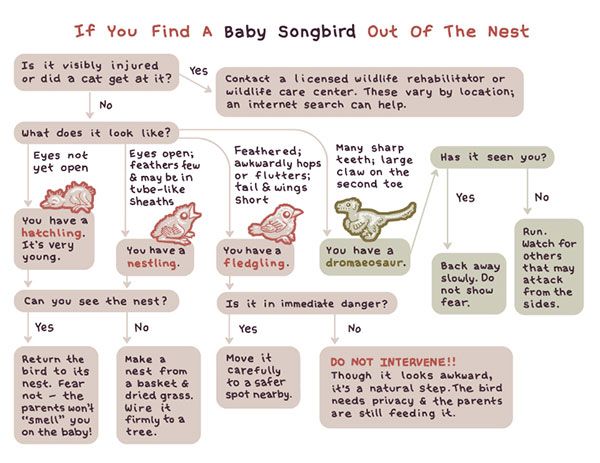 Baby Birds out of the Nest

Graphic by Rosemary Mosco of Bird and Moon Science and Nature Cartoons, birdandmoon.com

How to Report Threats or Damage to Birds and Their Habitat

Please contact the Texas Parks and Wildlife Warden at 281-842-8100 if you wish to report an incident involving damage to birds, their nests or their habitat.

In addition, If you find a dead or injured bird, you can make an important contribution to Audubon Texas' conservation work by submitting the information through D-Bird.

"Unless and except as permitted by regulations made as hereinafter provided, it shall be unlawful at any time, by any means or in any manner, to pursue, hunt, take, capture, kill, attempt to take, capture, or kill, possess, offer for sale, sell, offer to barter, barter, offer to purchase, purchase, deliver for shipment, ship, export, import, cause to be shipped, receive for shipment, transportation, carriage, or export, any migratory bird, any part, nest, or egg of any such bird, or any product, whether or not manufactured, which consists, or is composed in whole or part, of any such bird or any part, nest, or egg thereof, included in the terms of the conventions between the U.S. and Great Britain for the protection of migratory birds concluded August 16, 1916, the U.S. and the United Mexican States for the protection of migratory birds and game mammals concluded February 7, 1936, the U.S. and the Government of Japan for the protection of migratory birds and birds in danger of extinction, and their environment concluded March 4, 1972 and the convention between the U.S. and the Union of Soviet Socialist Republics for the conservation of migratory birds and their environments concluded November 19, 1976."

(a) Except as provided by this code, no person may:
(1) catch, kill, injure, pursue, or possess, dead or alive, or purchase, sell, expose for sale, transport, ship, or receive or deliver for transportation, a bird that is not a game bird;
(2) possess any part of the plumage, skin, or body of a bird that is not a game bird; or
(3) disturb or destroy the eggs, nest, or young of a bird that is not a game bird.
(b) European starlings, English sparrows, and feral rock doves (Columba livia) may be killed at any time and their nests or eggs may be destroyed.
(c) A permit is not required to control yellow-headed, red-winged, rusty, or Brewer's blackbirds or all grackles, cowbirds, crows, or magpies when found committing or about to commit depredations on ornamental or shade trees, agricultural crops, livestock, or wildlife, or when concentrated in numbers and in a manner that constitutes a health hazard or other nuisance.
(d) Canaries, parrots, and other exotic nongame birds may be sold, purchased, and kept as domestic pets.

No person may destroy or take the nest, eggs, or young of any wild game bird, wild bird, or wild fowl protected by this code except as provided in this code.