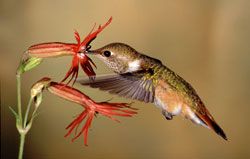 Hummingbirds live on a combination of flower, nectar and minute insects. Often they eat insects found in the nectar, and they also catch insects in the air. In winter, hummingbirds are known to follow sapsuckers around to feed on tree sap extracted from sapsucker drilling holes.

Planting a hummingbird garden is the ideal way to attract hummingbirds and much more effective than using feeders. In designing a hummingbird garden, you should pay particular attention to the times of year various flowers bloom. In Houston it is especially important to have flowers in the fall and winter, since that is when we have the greatest hummingbird concentrations and the largest number of species. In the following list, the main blooming period for each plant has been added. However, variable factors such as temperature, location of plant, type of soil, etc., also need to be considered, so these dates should only be used as general guidelines. Some of the plants listed, such as pentas, hamelia, abutilon, firespike and some salvias will have winter blooms if temperatures are mild or the plant is protected.

Feeders are a very useful supplement to the hummingbird's natural foods. There are several excellent brands on the market. Be sure to use one that can be easily cleaned. In our humid weather sooty mold easily grows on feeder parts and is harmful to hummingbirds. For that reason feeders need to be cleaned every few days. The feeder does not need to be large as usually only one bird at a time will feed at it. Also, there is no point in putting out a huge supply of nectar as you will be changing it anyway when you clean the feeder. Some feeders come supplied with bee guards (small plastic plugs with a grid design). Studies have shown that bee guards have sometimes caused injury to hummingbird bills so we don't recommend their use. If the design of the feeder is such that a bee guard is required, cut out the center of the guard with wire clippers to avoid possible injury.

Do Not Use Red Food Coloring! As long as there is some red on the feeder, the hummingbirds will find it. It is not necessary to buy commercial hummer nectar, as it is very easy to make. Simply mix hot water and sugar. Us no sweetener except sugar (no honey and no artificial sweetener!).

Hummingbirds will more readily use a feeder if it is close to hummer-attracting plants. Try to put it in an area which receives some shade. In particular, glass feeders should not be placed where they will get afternoon sun as in the summer the nectar temperature would become unbearably hot. Hummingbirds appreciate having a nearby shrub or tree to perch in. They are very aggressive about protecting a feeder. Therefore if you want to provide nectar for several hummingbirds, try to place several small feeders in widely separated areas rather than using one large feeder.

It is not necessary to take down your feeder in the winter, since there are always some birds who stay here in the winter months. But if you choose to keep it up past October, you must be particularly careful to keep it filled as birds will rely on it more than in other times of the year. Hummingbirds are able to survive extremely cold temperatures if their food source is maintained. Hummingbirds survived the Christmas freeze of 1989 when temperatures dropped to 8 degrees, but the feeders needed to be replaced every couple of hours to keep the nectar from freezing. Brooder lights have been used quite successfully to keep feeders from freezing during prolonged cold spells, even with temperatures in the teens. Under normal Houston winter conditions it is only necessary to bring the feeder indoors on nights when a freeze is predicted. But remember to put it back out first thing in the morning!

Hummingbirds are known to nest inside Houston's city limits, but only rarely. You should count yourself fortunate indeed if a hummingbird chooses your yard for a nest. Your chances are better if your yard is fairly heavily wooded with both mature trees and thicket-style shrubbery. Willow trees are especially useful, as the hummingbird uses the willow silk found around its seeds to line her nest. Hummingbirds also seem to prefer a site with a permanent water source, such as a pond or creek. After mating, the male is not involved in nesting duties. The female alone builds the nest and raises the young.