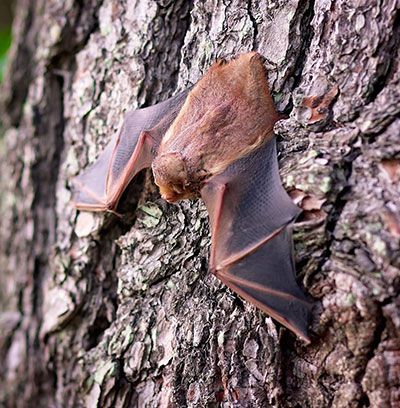 One of the most interesting and often-seen types of wildlife at night is bats. We most often notice bats flying erratically at dusk or early morning in our neighborhoods. Bats roost (sleep) during the day and we can find them in many different habitats including cavities in trees, behind the loose bark of trees, in tree leaves, on tree trunks, under bridges and in buildings. Perhaps the best known bat in Texas is the Mexican/Brazilian free-tailed bat (Tadarida brasiliensis). This is the species that many people go to the Waugh Street bridge in Houston or the Congress Street bridge in Austin to watch leave their roost site under the bridges at dusk. This species is highly migratory, arriving in late February-early March to spend the summer in Texas and breed. In the fall they migrate south to Mexico for the winter. The Mexican/Brazilian free-tailed bat is our state flying mammal.

Bats in general are very beneficial mammals that consume hundreds of thousands of insects per night, including mosquitos, moths, and beetles. According to the Texas Parks and Wildlife Department studies have shown that the agricultural value of insect control by bats is $1.4 billion annually in Texas alone!
We have several other bat species but these do not receive the attention that the above-mentioned species does. A few of these are the eastern red bat, the northern yellow bat, big brown bat, and the evening bat. These are the ones we are more likely to see in our neighborhoods. Thirty-three species of bats have been recorded in the state but several of these are rare occurrences.

Bat houses have been in use in Europe for over 60 years. In the U.S. they are a fairly recent phenomenon. Success depends upon many factors, such as the species of bats in your area, style of house, location, and proximity to water. We recommend you check with Bat Conservation International for details. In addition to selling houses and house plans, they are in the midst of a research project on bat-housing and can offer you the best advice on what type of house to use. Providing suitable roosting habitat is the best way to encourage bats. Of particular importance is to let the lower dried palm fronds remain on palm trees. In addition, any kind of water feature such as a pond or swimming pool is also an excellent lure.