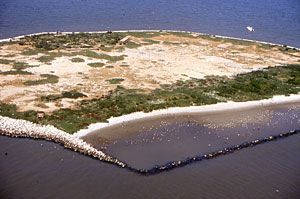 In the late 1980s an unprecedented coalition of eight governmental agencies was given the task of identifying environmentally and economically responsible ways to utilize materials dredged from an expansion of the Galveston Bay ship channel. The Beneficial Uses Group (BUG) was formed, and the decision was made to construct marshes and a bird island with the dredged material. Houston Audubon was involved with the planning of the bird island early in the process and entered into a contract with the Port of Houston to plant and manage the vegetation on the 6-acre, 6-sided island that was eventually created. Houston Audubon took over management of Evia Island in December of 2001, and Evia is now a productive nesting island.

The Story of Evia Island - If You Build It, Who Will Come? 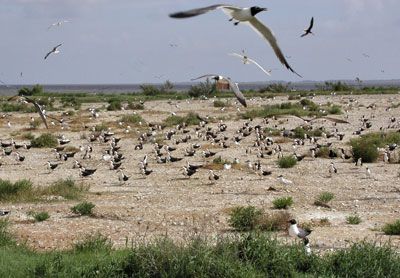 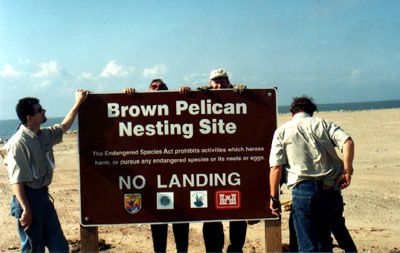 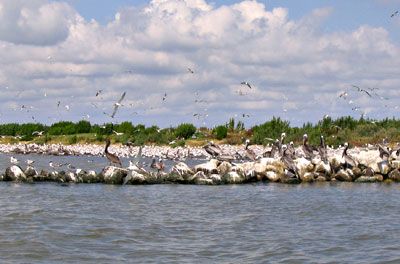 It started as a problem: "What do we do with dredged material?" In the late 1980s the Port of Houston and the Army Corps of Engineers needed to widen and deepen the ship channel. Environmentalists didn't want the practice of open bay disposal of the dredged material continued as it damaged the bay bottom and water quality. The Port and the Corps agreed that it was time to look for better ways to handle dredged material so the Beneficial Uses Group (BUG) was formed, an unprecedented coalition of eight governmental agencies given the specific task of identifying environmentally and economically responsible ways to utilize the material dredged from the ship channel expansion.

After many meetings plans were made; they would construct marshes and a bird island. Due to subsidence, erosion and development Galveston Bay has lost more then half its salt marsh and most of the natural nesting islands. The habitat to be built with the dredged material would replace lost habitat.

Houston Audubon was involved with the bird island planning early in the process. There were meetings about design, plantings and a management contract. The design wound up as a six acre, six-sided island with a beach on one side. The island would be armored with rock and the beach protected by a breakwater. One half acre of the island would be planted with trees and shrubs for herons, egrets, ibis and spoonbills. The rest of the island would have low vegetation or no vegetation for pelicans, gulls, terns and skimmers.

The island, built in 2000 was called the Bolivar Bird Island for several years. In 2001, the Port of Houston Authority and the U.S. Army Corps of Engineers asked local elementary school students to name the island. The last thing they expected was to get a history lesson from a 9-year-old. But that's exactly what they got from Ally Levy, a fourth-grade student from Pearland.

Ally's entry, Evia Island, won the grand prize in the contest and is now officially the name of the island. Levy submitted Evia Island to give recognition to Jose de Evia, the Spaniard who charted the Gulf of Mexico in 1786. During his explorations, Evia mapped an area near the mouth of a river and then named it Galveston in honor of his superior Spanish colonial governor and general, Bernardo de Galvez. The island and the city later took the name, although Galvez never actually set foot on either.

Houston Audubon  took over management of Evia in December of 2001. The first challenge was planting the half acre motte with trees and shrubs used by birds on other islands. Cactus, lantana, hackberry, mesquite, huisache, lime prickly ash, salt cedar and narrow-leaf forestiera were rounded up. Cactus and salt cedars were collected locally, hackberry, mesquite, huisache, lantana and the lime prickly ash were purchased from a nursery in South Texas and the forestiera was grown from cuttings. Plants had to be transported out to Evia along with water, mulch and a gel called Driwater that gradually converts to liquid water when placed in the microbiological environment of natural soils. When we started planting we found that Evia's "soil" was very hard clay dredged up from the bottom of the bay. Digging was a challenge, but we were up to it and on March 13 - 14, 278 plants were planted. In April we noticed that some of the plants were distressed. Soil tests showed that our "soil" was very salty and it turned out that we had planted some species that resented salt.

Salt was not the only problem, we didn't have birds. We had expected them to flock in, but that didn't happen. We would see a few Least Terns when we visited, but no nests, it was a puzzle. A thorough search of the island turned up river otter tracks, the rocky sides of the island were a perfect home. Notorious nest predators otters can cause even a well-established nesting colony to abandon. No wonder ours wasn't getting off to a good start. While we puzzled on how to remove the otter he left on his own but not without ruining the 2002 nesting season. In late September tropical storm Isidore brought heavy seas to Galveston Bay and the salt spray browned most of the plants that had survived the salty soil. This project was not working well. We were hopeful for 2003. 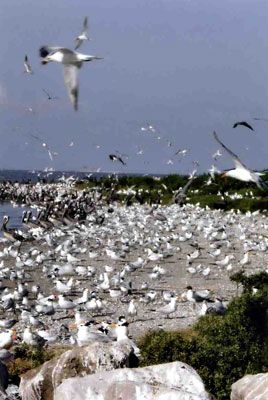 During visits to Evia in early 2003 few birds were found on the island most likely due to the Peregrine Falcon that was observed sitting on the island's signs. Fortunately the Peregrine finally headed north and Black Skimmers, Gull-billed Terns, Royal Terns and Sandwich Terns were able to set up on the island. The nesting survey done on June 1, found 904 pairs of nesting birds.

Breeding seasons since then have been very successful. In 2005, Brown Pelicans nested on the island for the first time. They nested elsewhere in 2006 but 100+ pairs settled in for the 2007 season.

We lost all of the hackberries, lantana, lime prickly ash, and narrow-leaf forestiera to salt. But cactus, mesquite, huisache and salt cedar have done well and we have planted more. In 2006 Great Blue Herons, Great Egrets, Snowy Egrets and Tricolored Herons decided that the vegetation was dense enough and they moved in.

Evia Island is a partnership between the Port of Houston, The Army Corps of Engineers, the Beneficial Uses Group, and Houston Audubon. Evia is now a very productive nesting island.