Activities for All Ages

Location:  TBD depending on roost location, typically Stafford or Willowbrook.

Background Information: From July to September, Houston's Purple Martins spend most of the day feeding on flying insects to build energy for their long journey across the Gulf of Mexico. At dusk, they form large flocks and roost together in preparation for migration. Join us to watch the amazing spectacle!

We recommend you bring a chair and an umbrella. 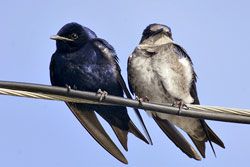 Peak numbers for Purple Martins occur in July and August when Purple Martins form large flocks and roost together in great numbers in preparation to migration. Some roosts may have thousands of birds. When the birds arrive to roost in the evening, it can be an amazing spectacle with the sky literally black with martins! If you know of a large roost, please contact us at birds@houstonaudubon.org. We have prepared an informational flyer about communal roosts, suitable for display. Join us in helping to protect Purple Martins!

Purple Martin flight patterns are sometimes visible on weather surveillance radar. The patterns can resemble rings which are particularly dense as they disperse to forage in the early morning.