Make Your Cup of Joe Work for Bird Conservation 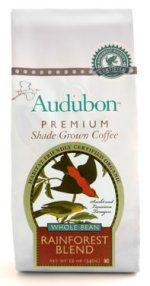 Shaded-coffee farms are often the last refuge for forest-dependent birds and other animals in many coffee-growing regions of Latin America.

With the rapid destruction of pristine forests throughout much of their wintering grounds, many migratory songbirds that nest in the United States and Canada are becoming increasingly dependent on alternative habitats for their winter destination, including shaded-coffee farms. In the 1990s, biologists working in Mexico discovered that traditionally, shade-managed coffee and cacao plantations supported at least 180 species of birds, an amount significantly greater than bird numbers found on any other agricultural land and exceeded only by undisturbed forest. The researchers found 94- 97% fewer bird species in "sun" coffee farms than in "shaded" coffee farms.

An array of shade levels exist within coffee farms all over the northern portion of Latin America. On one end, the "shade- grown" coffee farm –and the traditional way- cultivates coffee bushes under tree species native to the area (or at least native to the region). Birds love these native trees for their nectar and insects attracted to the nectar. The Inga is an example of a tree which provides a lot of shade trees throughout coffee plantations in the Americas. Ingas are covered with epiphytes—plants that live on other plants, in this case the limbs and branches of Inga trees. For birds that make their living poking around masses of vegetation, Ingas harboring epiphytic plants such as bromeliads (pineapple relatives), orchids, and ferns provide a huge variety of niches in which to find food. In addition to helping songbirds, studies have shown that shade coffee farms support a richer diversity of small mammals such as margays, ocelots, foxes, ringtails and bats than areas without shade as well as supporting a great diversity of reptiles, insects and native plants.

Some coffee plantations choose to have some shade trees, but if too few or if they only provide a short, thin layer of foliage above the coffee plants (less than 12 meters in height), they do little in the way of providing habitat for birds habitat for migratory forest songbirds or resident birds associated with the local area. A third type of farm has no shade at all; fields with coffee bushes grown under direct sunlight are referred to as technified farms. This technification represents a high-tech or "farms as factories" approach to coffee production. This new production system differs from traditional techniques in that it rests upon the assumption that higher yields are better. New production techniques include the removal or thinning of shade trees, the planting of high-yielding coffee varieties, and the introduction of (and often dependence upon) an arsenal of agrochemicals. Synthetic fertilizers, insecticides, herbicides, fungicides and nematocides are constant companions of farmers who have chosen to technify their farms (1).

In addition to coffee, other products that are grown in or near habitats that affect birds and other wildlife include chocolate, sugar, vanilla, cotton, and wood. About half of the sugarcane in the US comes from southern Florida, where the sugarcane industry has been encroaching on the Florida Everglades for nearly a century. More than a billion gallons of water are diverted away from the Everglades to the sugarcane fields every day, according to the Everglades Trust Foundation. In addition, phosphorus run-offs from the sugar industry have devastated the Everglades' ecosystem, and the sugar lobby has worked aggressively to avoid responsibility for repairing the damage.

Studies have found that phosphorus run-offs are already changing the ecological balance of the river system. For example, increased phosphorus in the water kills off the Everglades' naturally occurring saw grass, in favor of denser, taller, phosphorus loving cattails, which sets off a ripple effect across the ecosystem. The loss of the saw grass means a loss of habitat for wading birds, while decomposing cattails can kill a type of algae that thrives among saw grass, in turn killing the fish that feed upon the algae.

Sugarcane farming abroad does not have a better record. The World Wildlife Fund estimates that, because of habitat destruction, intensive water use, heavy use of chemicals, and polluted wastewater, sugar may be responsible for more biodiversity loss than any other crop worldwide (2).

Given this information, what can we do as consumers? In addition to "shade-grown" or "bird-friendly" coffee and organic sugar, shop for products bearing the Fair Trade Certified™ label. This label appears on coffee, sugar, tea, chocolate and many other products independently certified by TransFair USA. This nonprofit certifying agency travels to producer sites at least once per year to ensure that farmers receive a fair price for their goods and work in healthy and environmentally sustainable conditions. The Fair Trade label also means more attention is paid to the environment; many companies use less chemicals or non at all. On Fair Trade farms, producers must adhere to strict standards regarding the use and handling of pesticides; the protection of natural waters, virgin forest, and other ecosystems of high ecological value; and the management of erosion and waste, according to TransFair USA. In addition, farmers in the fair trade system are guaranteed the financial and educational support they need to not only meet their basic living needs, but to improve their communities, develop their businesses, and improve their economic positions. TransFair also ensures that the farms it certifies have no child slaves working their fields (3).