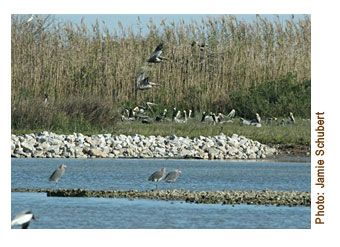 Houston Audubon owns one-third of this 120-acre island.  Together with National Audubon, 70% of the island is now under permanent protection. Located in Galveston Bay between Tiki Island and Galveston Island, North Deer hosts the most productive waterbird breeding colony in Galveston Bay (20,000-40,000 pairs of birds of 17 species nested there in 2005). Houston Audubon's approximate 7-acre interest was acquired by donation in 1975.  In late 2020, Houston Audubon was also gifted 40 acres of North Deer Island from Brown/Trueheart, Ltd. The late Henry Martyn Trueheart of Galveston acquired his 33% share of North Deer Island and it remained in the family for over 120 years, having been most recently held by Brown/Truheart Ltd. whose partners are all great-grandchildren of Mr. Trueheart.

One-third of the island is uplands covered mostly by South Texas vegetation, and two-thirds is a productive salt marsh. It can only be viewed by boat.

In 2009 North Deer Island was designated a Global Important Bird Area by the National Audubon Society and BirdLife International.

North Deer Island, is a busy place in the summer. Thousands of birds are coming and going all day. Adults are bringing food, and juvenile birds are learning to fly. Nineteen species of waterbirds nest on North Deer, including endangered species, such as Brown Pelicans, and those on the edge, such as Reddish Egrets and White-faced Ibis. The number of nests on the island can be staggering-it is not unusual to have 20,000 pairs of White-Ibis and 1,000 pairs of Brown Pelicans, plus 2-3,000 pairs of Laughing Gulls, all sharing the island habitat. Herons, egrets and spoonbills squeeze in where there is room. It is a pretty amazing place.

There is no public access to North Deer Island.

The partnership formed by Houston Audubon, Texas Parks and Wildlife and several other agencies, foundations, and individuals recently received the Gulf Guardian Award for 2008 in the Partnership Category. This award was bestowed by the EPA's Gulf of Mexico Program. Houston Audubon thanks the Gulf of Mexico Program for its recognition of the commitment of all the parties involved in the protection of North Deer Island. 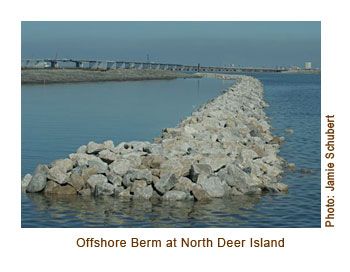 In 1998 Tropical Storm Frances took 40 feet off the east side of North Deer Island, an Audubon sanctuary owned by Houston Audubon, Audubon Texas and 6 additional undivided interest owners. North Deer Island is in Galveston Bay between Tiki Island and Galveston Island. We knew North Deer was eroding, but this event was galvanizing. We quickly set up a simple system to monitor island erosion and found most of the shoreline of the island was eroding 5 feet a year. It was critical that the island be protected as it is the most productive waterbird colony in Galveston Bay. So in 2000 we yelled for help, and Texas Parks and Wildlife (TPWD) came to the rescue.

Woody Woodrow and Jamie Schubert from TPWD worked with the Texas General Land Office and URS Engineering to create a plan, and the North Deer Island Protection and Restoration Project began. They determined that the northeast and southeast sides of the island received the most wave energy and needed shoreline stabilization to stop erosion; innovative short rock groins were designed for the northwest side of the island adjacent to the Intracoastal Waterway to slow down barge wakes and capture sediment. On the southwest side the plan called for an offshore armored earthen berm to slow down wave energy and encourage sediment deposition.

Offshore BermNext, money had to be raised and permits secured. The project was so large that it was divided into two parts. Construction on Part I, the armored earthen berm on the southwest side of the island, occurred in 2003. We quickly found that the engineering design worked well. Not only did it stop the erosion, but sediment also started building up adjacent to the island, and the salt marsh began expanding.

The search for funding for Part II was completed in 2007 and construction begun in December. How exciting to think about the project being completed! And completed it was in March 2008. Great Blue Herons were nest building before the project was done, and now there are thousands of nests overlooking the secured shoreline.

This project could not have been completed without the leadership of TPWD and the hard work of Jamie Schubert and Woody Woodrow (now with USFWS). We are grateful for their commitment to protecting habitat on the Texas Coast.