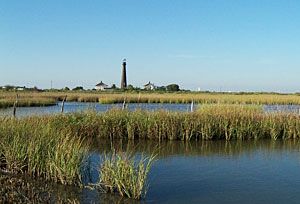 Please Note: There is currently no public access to the interior of the sanctuary. Observations can be made by car from Hwy 187 and Loop 108.

This 650-acre wetland complex, located near the Bolivar ferry landing adjacent to the historic Bolivar lighthouse, includes salt marsh and wet coastal prairie surrounding a shallow tidal lagoon. It is critical habitat for large numbers of shorebirds, waders, and ducks including Roseate Spoonbills, Oystercatchers, Long-billed Curlews, Seaside Sparrows and Clapper Rails, among others.

In addition to the value of this area as bird habitat, there is a significant contribution to the local economy by the thousands of birdwatchers from all over the world who visit the area each year. The Horseshoe Marsh's productive wetlands also provide food for large numbers of fish and other sea life which provide recreational opportunities for fishermen who catch Redfish, Speckled Trout and Flounder and for families who come to catch Blue Crabs. Houston Audubon has been working to protect wetland habitat on the Bolivar Peninsula since the early 1980's and acquired its first tract in Port Bolivar in 1997. 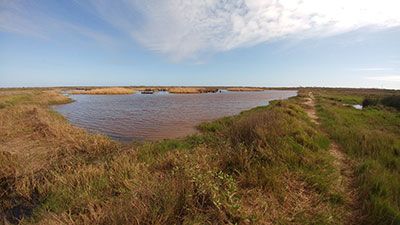 The Horseshoe Marsh Nature Trail is a work in progress. Once the project is complete, it will be open to the public. At the present time, there is no public access to the interior of the sanctuary.

The first phase of the Horseshoe Marsh Nature Trail is complete and includes a culvert, parking area, mowed trail, and boardwalk across a shallow pond. The boardwalk was completed in partnership with the American Youthworks Texas Conservation Corps. At two-tenths of a mile, it offers a path into the core of the sanctuary where Nelson's Sparrows are thick in spring, White-tailed Kites and Gull-billed Terns cruise the wetlands all summer, and waterbirds galore can be seen and heard year-round in the wetlands. The project took flight after the purchase of a 15-acre parcel contiguous with Horseshoe Marsh. The new property has frontage on Loop 108, which has much less traffic than Hwy 87, and is a quieter and safer entry point. Houston Audubon and the American Youthworks Texas Conservation Corps have applied for a grant to complete the second phase of the trail, which would include simple trailhead amenities, habitat restoration, a longer boardwalk, two overlooks, interpretive signage, and a natural trail along the brushy ridge to a view of the lighthouse.

The purchase of Horseshoe Marsh took two years to complete. It was a complicated purchase by Houston Audubon of 4,126 lots through the bankruptcy court in 2003. The acquisition was made with a grant from the USFWS North American Wetlands Council and donations from Houston Audubon members and birders around the country. Over 1,000 donations were received from donors in 39 states.