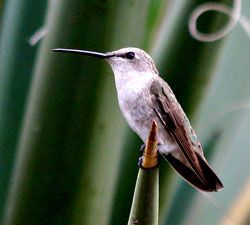 Seasonal Occurrence: Uncommon October through May.

Notes: Black-chinned Hummingbirds are very common in the western United States, breeding in West Texas and areas west and north up into Canada. Houston is at the eastern edge of their range and they can be relatively common here in winter. In fact, according to Brent Ortega, 85% of the time someone sees what one thinks is a Ruby-throat in winter, it is actually a Black-chin. The male is similar to the Ruby-throated Hummingbird, but his gorget is mostly black with a difficult-to-see band of violet-purple below, rather than the all red gorget of the Ruby-throat. Females and immatures are notoriously difficult to distinguish from the Ruby-throat, but their plumage above is a more dull green and in a perched position, the wings appear longer with the outer primary feather broader with a blunt curved end, whereas the Ruby-throat's appears pointed and shorter, because of the longer projection of the tail beyond the wing tips. Another clue to distinguish a Black-chin from Ruby-throats is that the former usually wags and pumps the tail when hovering. Helen's photo of a nesting female, which was taken during the Concan NatureQuest, clearly shows the blunt ends of the primary feathers.
- Susan Billetdeaux 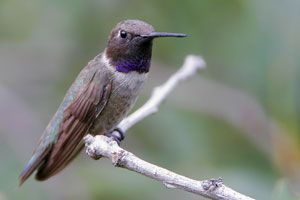 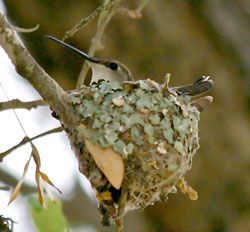