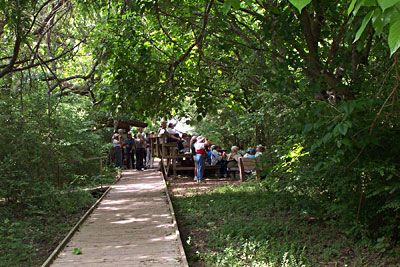 The woods of High Island have undoubtedly been an important stopping place for migratory birds for thousands of years. However, they have only been attracting birdwatchers since the 1940s, when birders from nearby Beaumont began to haunt the woods every spring.

Recognizing the value of High Island's habitat, the Houston Audubon Society bought what was to become the core of the High Island sanctuary system, the four-acre Louis B. Smith Bird Sanctuary (also known as Boy Scout Woods) in 1981. An additional 11 acres surrounding this small core was leased from Amoco Production Company.

In 1991 the opportunity arose to purchase a 40% undivided interest in the Smith Oaks Sanctuary nearby.

The High Island Initiative was formed in 1992 with the goals of expanding the HAS sanctuary system on High Island and establishing a bird observatory to address the needs of migratory birds. The partners in the Initiative were HAS, the Nature Conservancies of Texas and Louisiana, the U.S. Fish and Wildlife Service, the National Fish and Wildlife Foundation, Texas Parks and Wildlife Department, Amoco Production Co. and Phillips Petroleum Co. The actions of the partners resulted in the establishment of the Gulf Coast Bird Observatory, as well as the large-scale expansion and habitat improvements of the sanctuaries we see today.

High Island is the surface expression of a salt dome at the edge of the Gulf of Mexico. A thick layer of ancient salt exists throughout southeast Texas about 30,000 feet below the surface. At some locations, like High Island, a column of salt was squeezed upward toward the surface. This "dome" is a salt cylinder, some six miles tall and about a mile in diameter. As the salt dome rose, it brought massive amounts of salt and smaller amounts of other minerals close to the surface of the earth, where they sometimes mixed with groundwater. The movement of the salt shattered and tipped overlying sediment layers, and oil and gas in the rocks then traveled along the cracks in the rocks and "pooled" around the edges of the dome.

Oil exploration began on High Island in 1901, soon after the Spindletop discovery on a similar salt structure in the Beaumont area. Commercial production began in 1922. Exploration and production continues today, and oil, natural gas and sulfur have all been extracted from sediments brought up by the dome. Most production has been found along the west, north and east sides of High Island.

Today High Island rises 32 feet above the surrounding marshes, providing soil conditions favorable to trees and shrubs. It forms a unique and important island of habitat for migrating birds.

High Island was undoubtedly used by Native Americans for thousand of years. No archeological site has been excavated on the island, but shell middens, pieces of black pottery and arrow points dating from as far back as 1200 A.D. have been found on Bolivar Peninsula and around Galveston Bay. These indicate the presence of hunter gatherers who roamed the region collecting shellfish and hunting the abundant wildlife. Native Americans may have also visited the mineral springs that were a result of the minerals associated with the salt dome mixing with groundwater, which used to exist on High Island.

According to legend, the pirate Jean Lafitte and his crew sometimes had parties in the big grove of oak trees that covered the island when they cruised the coast in the early 1800s. There are rumors that the pirates buried some of their treasure here. Although many have searched, no one has ever reported finding any trace of the pirates or their treasure. One of the early settlers of High Island was Martin Dunman, who arrived in 1845. He had received a league of land (three square miles) that included part of High Island for his participation in the Texas Revolution. Reportedly there was at least one house on High Island at that time, which had been built by Charles Cronea, one of Lafitte's cabin boys, when Dunman arrived with his wife and two sons. A historical marker, erected in Cronea's honor, can be found in the High Island cemetery.

The island's mineral springs played an important role in the local economy in the late 1800s. The railroad ran excursions to the community so that people could visit the springs and the beach.

The town had a large, ornate hotel called The Seaview, which was erected in 1895 by W.T. Cade. Built on the east side of the island, The Seaview faced the Gulf of Mexico. The hotel had a large ballroom and a mule drawn rail car that carried visitors to and from the beach several times a day. High Island's time as a resort was ended by the 1900 hurricane. However, the hotel survived the hurricane and was a very active location for many years. It was abandoned during World War II and burned in 1947.