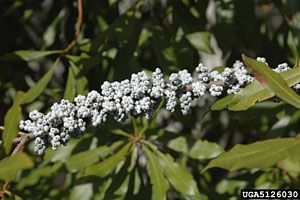 Description: (by Don Gray) Southern wax myrtle is native to the coastal plains from Texas to Florida and north to New Jersey, occurring in a wide variety of sites from swamps to upland forests to stream banks and lakeshores. It is an aromatic semi-evergreen small tree that normally matures between 6 and 20 feet tall. The 1.5- to 5-inch gray-green leaves are simple, alternate, with a few coarse teeth above the middle. They are glossy on the upper surface, duller underneath, with resinous glands on both. Aromatic when crushed, the dried leaves are used as a substitute for bay leaves for seasoning, and as a tea. Because the aromatic compounds in the foliage were believed to repel insects, wax myrtle was commonly planted around homes to keep pests away. A sprig of wax myrtle in a drawer is reputed to keep cockroaches out. The plants are dioecious, meaning either male or female, blooming February - March in our area. The "berries," actually drupes, appear on female plants only and persist through winter. The berries are covered with pale bluish-white wax long used to make bayberry candles.

Wax myrtle is tolerant of heavy soils, either wet or dry, open or wooded. It is relatively salt-tolerant, and grows in brackish margins of salt marshes; on the Atlantic coast it is a dominant species in dune communities. On the barrier islands of Virginia's eastern shore which offer few trees for nesting, large stands of mature wax myrtles have become rookeries for Great Blue Herons. Elsewhere it occurs in highly acidic nutrient-poor pitcher-plant bogs. Essential allies in this ability to thrive on poor soils are root nodules of nitrogen-fixing bacteria.

The Wildlife Connection: Wax myrtles are wildlife-friendly. The waxy berries are a high-energy food source for birds in winter. Yellow-rumped Warblers, formerly known as Myrtle Warblers, have special digestive enzymes that break down the fruit's waxy coating. Tree Swallows also devour great quantities of wax myrtle fruit. Brown Thrashers, White-eyed Vireos, Ruby-crowned Kinglets, Palm Warblers, Eastern Bluebirds, and Gray Catbirds are some of the other species known to be attracted to the fruit. In addition wax myrtle is the larval host for the red-banded hairstreak.

Propagation Tips: Plants spread and reseed on their own. Note that only female plants have berries. Male plants are needed for pollination.