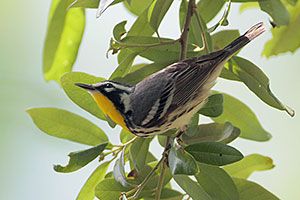 Seasonal Occurrence: Common in spring; occasional in summer and fall.

Profile by Glenn Olsen: One of my most memorable sightings of the Yellow-throated Warbler was in central Texas along the Cibolo Creek. I was admiring and appreciating a 100-foot tall bald cypress when near the very top I noticed movement in the bright green leaves. With my ever present binoculars, I tilted my head straight back and began focusing on the movement. Presently a gorgeous warbler with a bright yellow chin, throat and breast, a distinctive black and white facial pattern, and gray upper parts came into focus. I could see clearly two white wing bars, a white underbelly and black streaking on the flanks as the bird moved around looking for food. The contrast of the light green cypress leaves and the bright yellow of the bird’s throat offset by the gray and white of the body was a beautiful combination of colors.

This beautiful warbler is one of the few warblers that nest near Houston. This colorful species was chosen to be the first logo for Houston Audubon, so you will see it on older Houston Audubon literature. The males and females look very similar.

One of our early migrants, birds returning to breed may begin arriving around the end of February and are here throughout the breeding season, but often they are not easily located. By early October, this warbler usually returns to its wintering range, but an occasional sighting of a lingering bird may occur through December.

While it may be seen in a variety of habitats during migration, the Yellow-throated Warbler is usually found in three basic habitat types for breeding: upland pine woodlands; bottomland, mixed woodlands where some populations prefer American sycamore trees; and swamps and riparian areas where bald cypress is often a preferred tree. The Yellow-throated Warbler is most often found high in the treetops, singing or methodically feeding similar to a pine warbler, or it may be seen clinging to a limb upside down, nuthatch style. So this spring or summer when out birding in these habitats, keep an eye toward the treetops for this gorgeous warbler.

Comments by Don Verser: Note that Yellow-throated Warblers are never common in the fall. 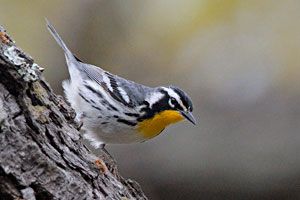