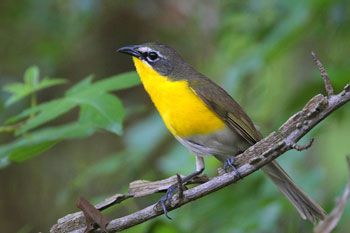 Seasonal Occurrence: Inland areas - common spring through fall. On the coast - uncommon spring and fall. Breeds in our area

Notes by Winnie Burkett: Chats are secretive for most of their lives. Along the coast chats are not an easy bird to see. In the spring at High Island you are much more likely to hear them than see them. They like to creep around thickets, often calling quietly with their strange combination of whistles, gurgles, chortles and grunts. You might have a better chance of seeing them in the fall, when their pursuit of poison ivy berries brings them out into the open. During the breeding season chats are the most obvious - they like to call from high perches and often do aerial courtship displays unlike any other bird. In the U.S. chats breed in 47 states; most winter in Mexico and Central America.

Profile by Azure Bevington: The Yellow-breasted Chat was recently split from the warbler family and is now the sole member of its family. At 7.5 inches in length, it is much larger than any warbler. They are commonly seen and heard in the spring when the males sing a broad repertoire of songs often from a high perch. In summer they breed throughout much of the continental U.S. typically in low dense vegetation, such as briars and willow thickets. In fall they migrate back to their wintering grounds in the coastal lowlands of Central America. We have just started to see a few as they pass through our Houston Audubon Sanctuaries in High Island, TX, headed south.

Chats have a long tail, large head, and a thick heavy bill. Both the male and female are plain olive green above, with a bright yellow throat and breast, and a white belly. They have a gray face with a white “spectacles” around the eyes, and a white malar stripe along the cheek.

They are often found in low thick brush, and tend to be well hidden, but can sometimes be seen making short flights between areas of cover. During migration, the Yellow-breasted Chat usually stays in low, dense vegetation but can also be seen in suburban habitats. Chats forage mainly on spiders and insects (which we have in abundance in High Island) as well as fruits and berries.