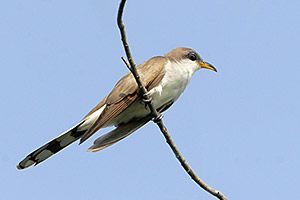 Profile by Glenn Olsen: This elegant and beautiful bird migrates from South America into the United States and southern Canada where it will mate and raise one to three chicks. Its slender body and very long tail give it an elegant and distinct profile. The milk chocolate colored upperparts and the clean white underparts give it a soft and beautiful appearance. The Yellow-billed Cuckoo is very secretive and difficult to spot. It perches on a branch inside the canopy of a tree, remaining motionless while searching for any movement of the caterpillars and insects that it feeds on. After a few minutes in this position, it will hop to another branch a few feet away and begin searching for insects again. It is more often heard than seen during the breeding months. Cuckoos are likely to build a nest in dense thickets or a tangle of vines in open woodlands, edges of fields, riparian areas, or the edges of bottomland forests. The nest is a loose and flat assemblage of twigs that may have a loose lining of a few leaves, tufts of grass or moss. Unlike the European Cuckoo, the Yellow-billed Cuckoo only infrequently lays her eggs in the nest of another species, and when that does occur, it is most commonly in a nest of the Black-billed Cuckoo or another Yellow-billed Cuckoo. While found in areas where good habitat exists, they are not abundant. Texas Breeding Bird Surveys indicate that this species has declined by 2% per year from 1966 to 1996 (Sauer et al. 1996). This decline is attributed to the complete loss of habitat in some areas and fragmentation of much of the remaining habitat. The best time to see one of these strikingly handsome birds is during migration as numbers of them are moving through our area. The High Island sanctuaries are good places to look for them in migration. So, I hope you will get outside and look for this gorgeous bird, and, if you’re lucky, you may even see a less common Black-billed Cuckoo!

Comments by Don Verser: Yellow-billed Cuckoo is apparently a common nester on the coast. Extreme late record of 24 Nov 2002 is from High Island.

Profile by Aidan Healey: Spring migration is often synonymous with the arrival of flashy yellow birds flitting through the treetops. But the Yellow-billed Cuckoo has only a little bit of yellow to add to the mix.

Yellow-billed Cuckoos appear slender and clean-cut, with their upperparts brown and undersides white. They have long tails with white spots underneath, their wings have patches of reddish-brown, and – you guessed it – they have yellowish bills.

Despite being comparable in size to Blue Jays, Yellow-billed Cuckoos are often hard to spot as they move sneakily and quietly through the treetops looking for insects to eat. They feed primarily on caterpillars, which many other species of insectivorous birds will avoid, but they will also catch other insects in flight.

When their food sources are particularly abundant, nesting Yellow-billed Cuckoos will occasionally lay an egg in a nearby nest belonging to another tree-nesting species, such as American Robin, letting the nest owners take care of feeding and raising their young. 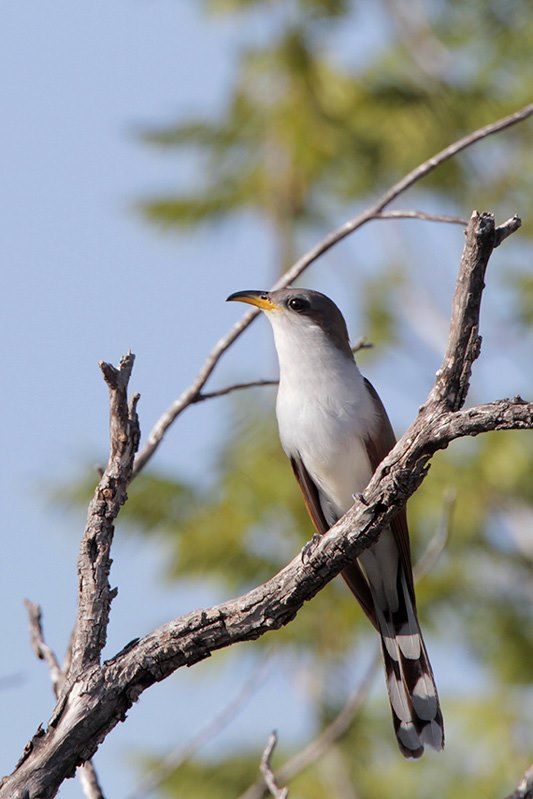 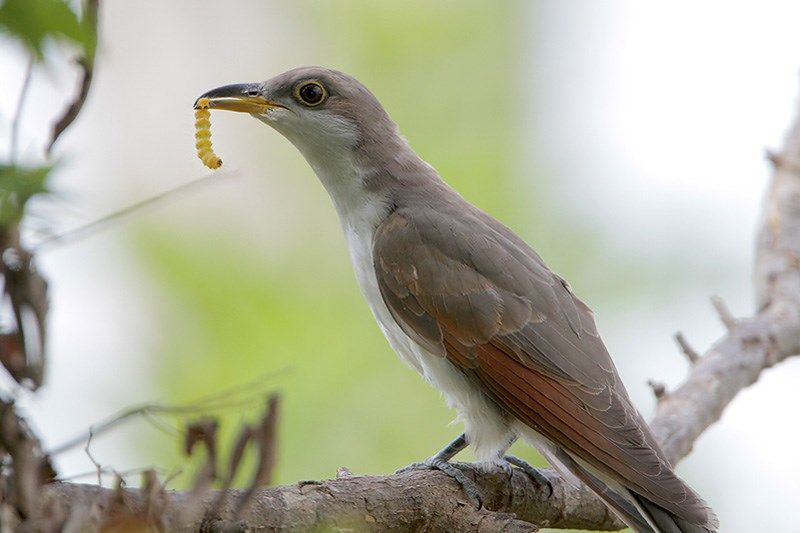 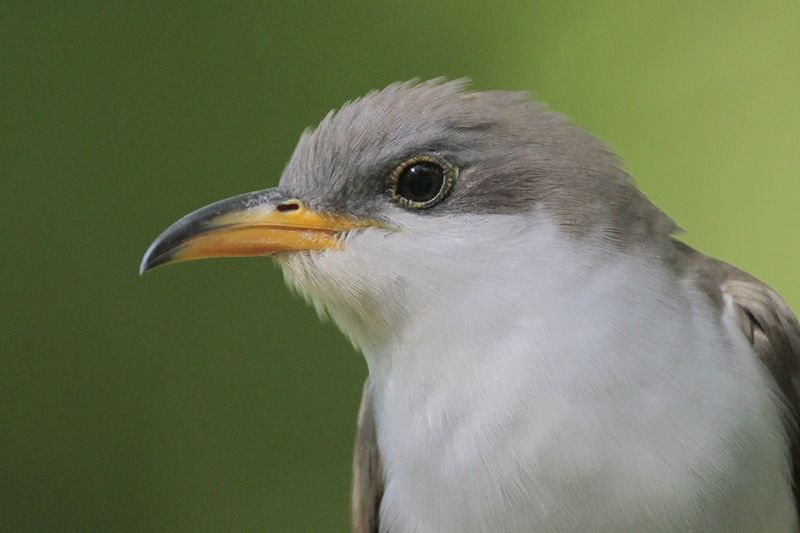