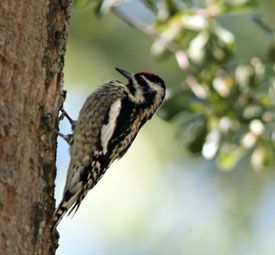 Profile by Glenn Olsen: One of the several birds that I anxiously look forward to the return of in the fall is the Yellow-bellied Sapsucker. For me, these birds herald the coming cooler fall and winter weather. Early arrivals begin showing up in our area in early October and their numbers increase thereafter becoming common to abundant in the winter.

Of the four species of sapsuckers occurring in the United States, the Yellow-bellied Sapsucker is the only one that we find regularly on the Upper Texas Coast. Their breeding range includes the northern latitudes of the central and eastern U. S. and throughout eastern Canada and the central portions of western Canada. We have the opportunity of seeing this species from October to April when most of them have migrated into the southeastern U.S., Mexico and Central America.

The body shape and silhouette is typical of the woodpecker family. A sapsucker is slightly but noticeably smaller than our resident red-bellied woodpecker. The back plumage color pattern varies but is generally black with whitish to dingy white indistinct barring that allows the sapsucker to blend quite well with the bark of many trees, especially live oaks. A distinguishing and generally noticeable plumage characteristic is a long, narrow white border patch along the side of the folded wings. This is most easily seen when the bird clings on the trunks of trees like its relatives. The head color pattern consists of a red forehead, a wide black eye line and two white horizontal stripes across the face; one beginning at the base of the bill and the other beginning at the eye. The male has a red throat and chin bordered by black and a black bib on the upper breast. The female has a white throat and chin bordered by black and a black bib on the upper breast. Most people want to see the yellow belly on the bird. Like some other species (red-bellied) the name does not quite fit our imagination of yellow-bellied. At best, one may see a pale, dull yellowish, yellow-green or yellow-brown tinge of color on the under parts of the bird. Nonetheless, it is a beautiful woodpecker and the only sapsucker we have to enjoy. Some of my non-birding friends are amused or even doubtful of my seriousness if I mention the Yellow-bellied Sapsucker; the name is just too comical.

This species is rather quiet to silent during the winter months and we are less likely to hear vocalizations of this woodpecker than other resident woodpeckers. The most likely sound to locate this sapsucker, provided there is not a lot of ambient noise, is the low and soft tap, tap, tap pecking that we may hear when a bird is developing a sap well. As the name implies, this species does consume sap from trees. Surprising to some sap is rich in sugars and even tastes sweet to my palate. To find the sap wells of this species, begin by looking in trees such as sweetgum, holly, magnolia, hackberry, or oak. However, there are many other species of trees and vines where one can find these feeding stations. It will be easier to locate the sap wells in a tree with smooth bark. Look for several to numerous dark spots in the bark that form horizontal rows that circle the trunk or limb. These are the wells. A number of other birds and insects also feed at these sap wells, this is termed commensalism. I have observed butterflies, Ruby-crowned Kinglets, Orange-crowned Warblers, Yellow-rumped Warblers, Ruby-throated Hummingbirds and Blue-gray Gnatcatchers at these sap wells. Foster and Tate, 1966 indicate that at least 35 different kinds of birds are associated with sapsucker wells either for the sap or the insects attracted to the sap or both. A sapsucker’s diet consists of sap, mast, insects (mostly ants and beetles), and fruit. They consume the fruit of hackberry, hollies, dogwoods, eastern redcedar, black gum and Virginia creeper to name only a few. Throughout its range the sapsucker may use several hundred different species of plants as food sources.

Although mostly silent in our area and easily overlooked, the Yellow-bellied Sapsucker is an interesting winter woodpecker to search for. They can be found in the trees of our yard, neighborhood or local parks. Find and observe them this winter.

Profile by Richard Gibbons: The Yellow-bellied Sapsucker is a member of the woodpecker family that winters in the southeastern United States. Similar to other sapsuckers, the Yellow-bellied Sapsucker has white vertical wing patches, an unbroken white stripe from the bill to the belly, and a stout beak. Adult males have a red crown, white throat, and a white belly. Females also have a red crown however, they differ from males with their white throat and pale yellow belly. Juveniles are more of a brownish color with a spotted crown. Their call is a high pitched and nasal sounding “neeeeah.” You may also hear five or so rapid taps followed by a slower double tap as they bore into tree trunks.

Yellow-bellied Sapsuckers winter primarily in deciduous forests. During the spring and summer, they often take advantage of edge habitats that are formed by some type of disturbance such as a timber harvest. They utilize the trees within the forest not only for shelter but also as a food source. The sapsuckers drill small holes in a neat pattern to create a horizontal line. They frequently return to these holes in order to feed on the sap that oozes out. The species is also known to feed on a variety of small insects, different parts of tree tissue such as the cambium and phloem, as well as fruits and berries.

The Yellow-bellied Sapsucker also uses the forest to nest. Both males and females will excavate holes in living trees including aspen, birch, maple, beech, and elm. They make the excavation process a bit easier on themselves by choosing trees that have softer wood due to some type of fungus or decay. The sapsuckers will often return to previously used trees year after year. Eggs are then laid on the wood chips that remain in the cavity.

The Yellow-bellied Sapsucker will most likely only be seen in Texas in the winter so if you want to see one, come on out to any of Houston Audubon’s forested bird sanctuaries! 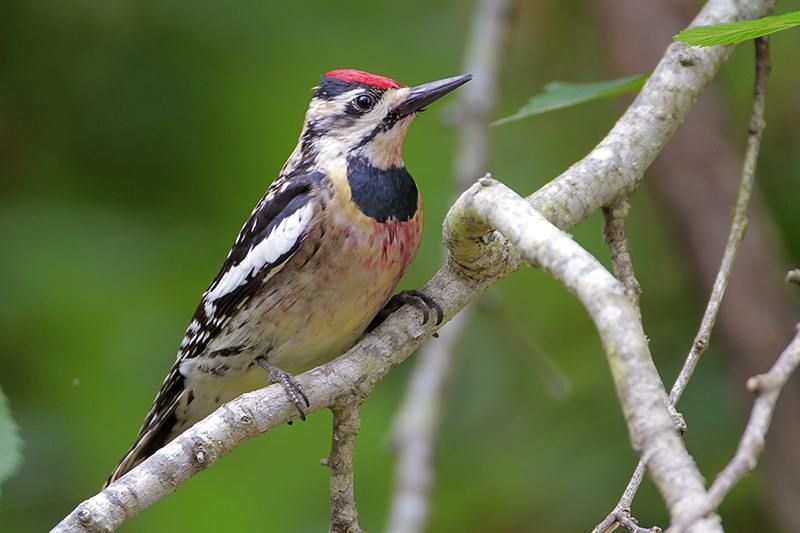 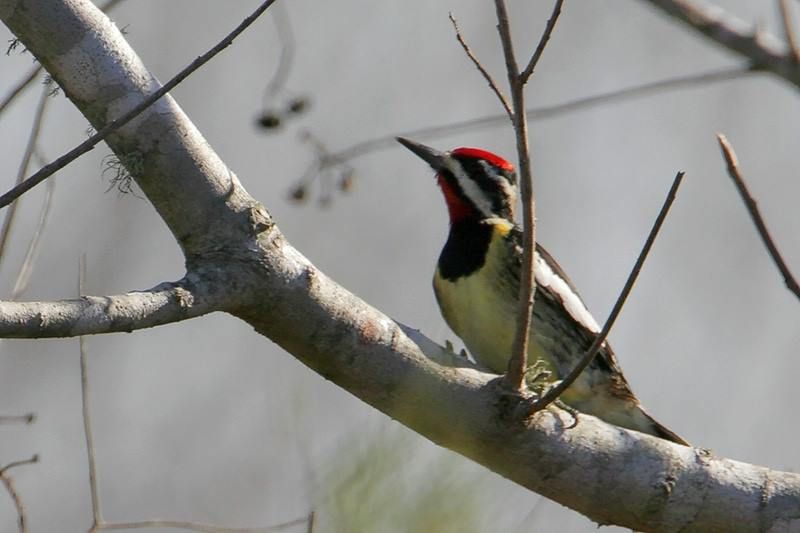 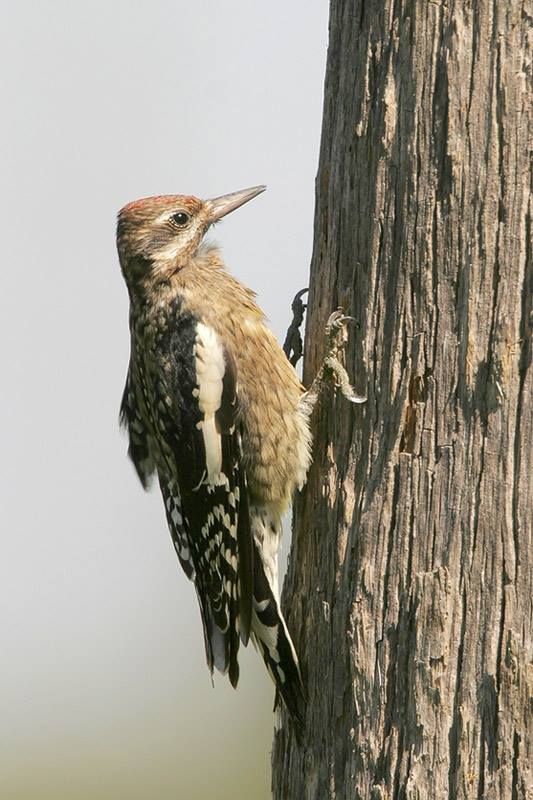 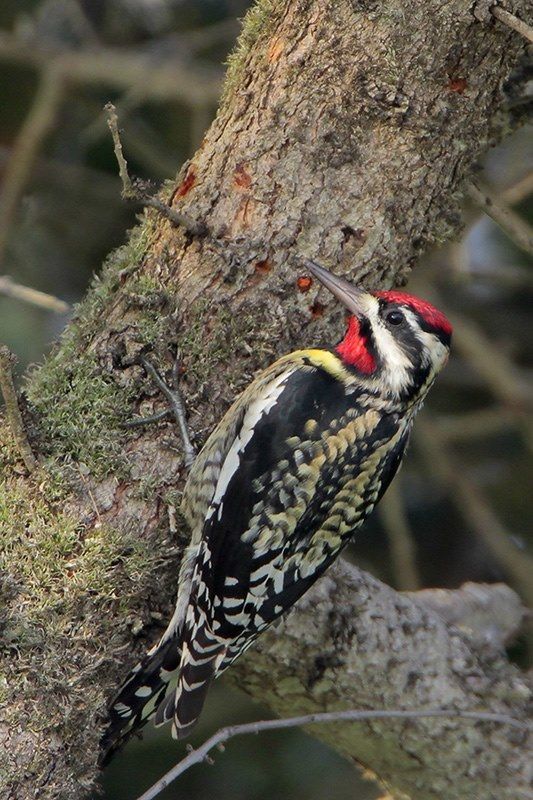 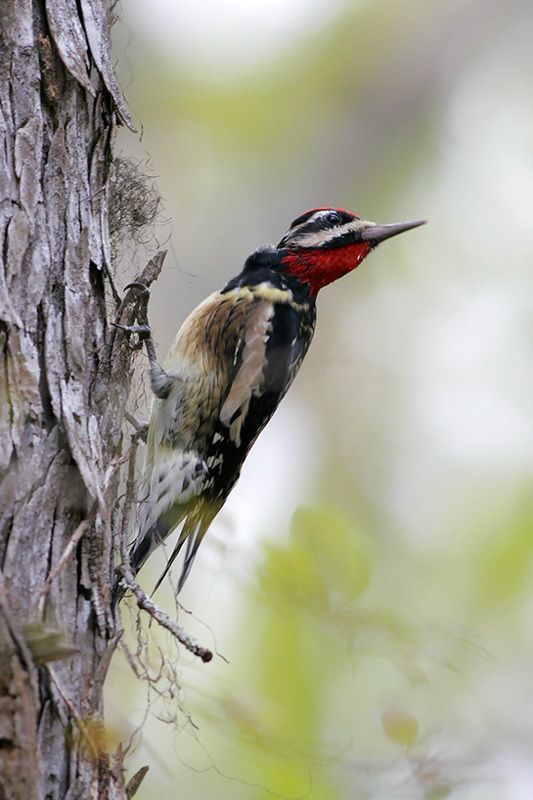 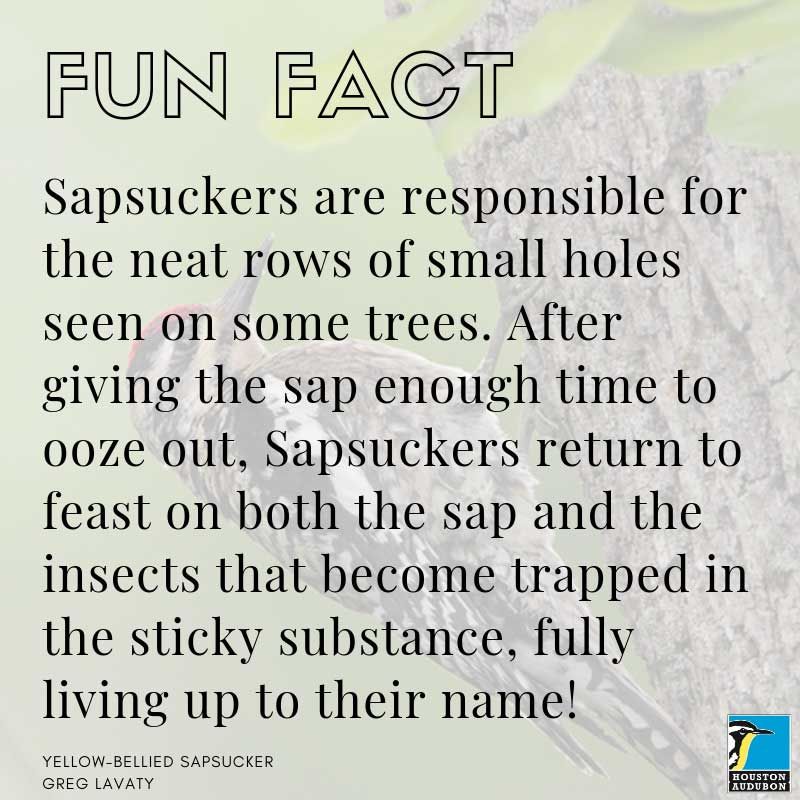