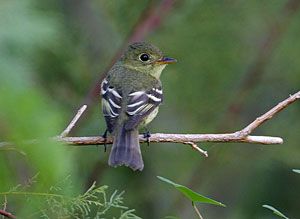 Profile by Glenn Olsen: The Yellow-bellied Flycatcher breeds in the boreal forest and bogs of Canada and a few northern states with the proper habitat. They migrate through our area primarily in mid-April through May en route to the breeding grounds. We are next likely to encounter them in fall migration, mid-August through September, as they return to Mexico and Central America for the winter.

The Yellow-bellied Flycatcher looks very much like the other empids, making identification both a challenge and a learning opportunity. Much of the identification metrics for a particular empid is based on comparing it to other empids. For example, the Yellow-bellied is overall olive-green on the upper parts like the Acadian Flycatcher but the Acadian is a lighter, brighter tone of green. While other empids may have a tinge of yellow in the undersides, the undersides of the Yellow-bellied generally has a more pronounced yellowish wash overall. In addition, it usually has a yellow wash in the throat and chin which all other eastern empids lack. However, in the fall and in some spring individuals, the yellow wash may not be so distinct. Great caution must be exercised in determining color as it appears different if the bird is in a shaded area versus a sunny area. The quality of your optics as well as your own perception can also lead you astray.

Other characteristics to look for include a large, round-headed appearance, usually a pronounced eye-ring, small bill, long primary projection, and bold wing bars in the spring (more worn in the fall). The primary projection is the relative length of the extension of the primary wing feathers beyond the tertials on the folded wing of a bird. This is once again a comparative measure relative to the other empids. Bear in mind that the field marks used for identification are subjective in nature and open to different interpretations. Most empids are best identified by song; however, they are not usually singing when they pass through our area. So, if you are not certain of the ID—and this often happens to me—it is perfectly acceptable to say that it was an empid and leave it at that.

Thank goodness the other eastern flycatchers are not this difficult to ID!