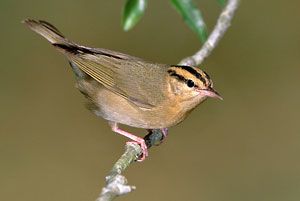 Profile by Vicki Stittleburg: A subtly attractive species, the Worm-eating Warbler has a buffy head and buffy underparts. It has bold, black crown stripes and a stripe through the eye. Named for its fondness for caterpillars (worms), this bird also consumes spiders and slugs. The Worm-eating Warbler is the only Texas-breeding warbler that nests on the ground. The female builds a cup nest of decaying leaves lined with grass, moss, plant stems and hair. The nest is hidden under leaf litter and constructed on a hillside or ravine bank, often near water. During incubation, the female becomes completely still on her nest, relying on her striped crown for concealment. If she is flushed, she will flutter across the ground with her wings and tail spread, acting helpless to lure predators away from her nest or fledglings.

Though common in Houston during spring migration, this well camouflaged warbler can be difficult to spot as it prefers to remain in the understory in dense thickets and woodlands. The song of the Worm-eating Warbler is a rapid, dry trill, often insect-like.

Comments by Don Verser: Worm-eating Warblers sometime give a thin call note, similar to that of Black-and-white, when moving around in the woods.