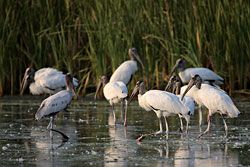 Profile by Bryce Loschen: Wood Storks are large wading birds with long legs, a long curved bill, and a bald head and neck. They are mostly white with black flight feathers. Wood Storks tower over most other wading birds standing over 3 feet tall. They often soar high in the sky, sometimes riding thermals with vultures or other raptors. In flight their large size, long necks, white body with black flight feathers extending across the entire wing make them distinctive. Juveniles look like adults but have lighter bills and gray neck feathers which they slowly lose over time.

Wood Storks forage mainly in shallow wetlands, swamps, ponds, and marshes. They prefer falling water levels because fish and other prey are likely to be concentrated in remaining pools. Foraging storks walk slowly through shallow water with their head down and bill in the water slightly, open, feeling for prey. When they feel or see a prey item they quickly snap their bill closed. Wood stork diet consists mostly of fish and aquatic invertebrates. Sometimes they will eat aquatic insects, snakes, baby alligators, small turtles, frogs, rodents, or some seeds and other plant material. Wood storks are colony nesters and breed in areas with trees above standing water such as cypress swamps and mangrove forests. Pairs construct large stick nests lined with twigs and leaves.

After the breeding season some storks will travel long distances based on resource availability in what is called post-breeding dispersal. During the late summer and fall months some Wood Storks travel to Eastern Texas presumably from breeding populations in Eastern Mexico. If you want to see a stork for yourself look for them soaring high in the sky or foraging in shallow wetlands during the next few months. Houston Audubon’s Smith Oaks Sanctuary is a great place to look for some roosting with other wading birds!

Notes: Tall and long-legged, the Wood Stork is the only member of the stork family native to America. White body with contrasting black edged wings and tail. Has a distinct dark, featherless head (down to the upper neck) and thick, down-curved bill. A post-breeding disperser from the tropics. They can be seen soaring high above in groups as they migrate across the landscape looking for receding freshwater ponds and stranded fish therein. Wood Storks fly with neck and legs extended, interrupting strong wing beats with brief glides; their wingspan can be up to 5 1/2 feet.

Male and female Wood Storks usually mate for life, they will build the nest together, and together incubate the eggs and feed the chicks. The chicks fledge in about two months.

The speed at which the Wood Stork shuts it bill is one of the fastest reflexes known in vertebrate species! 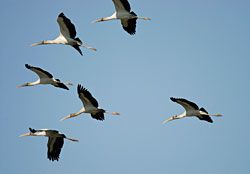 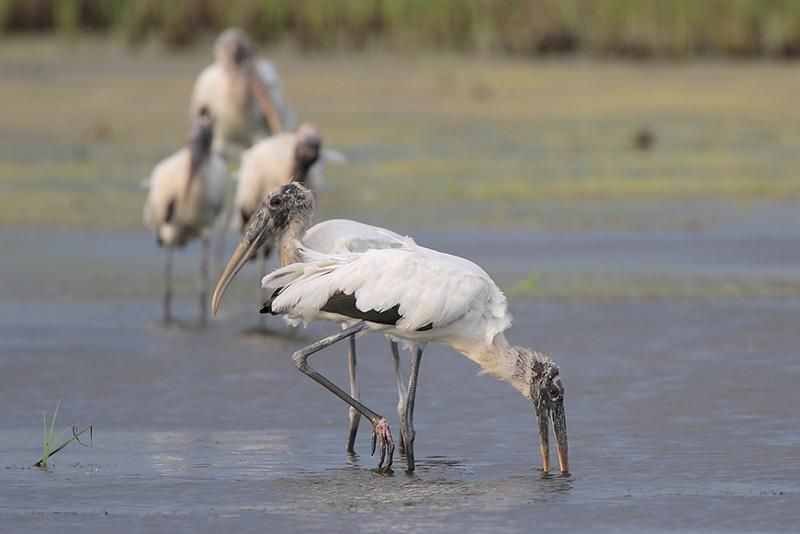 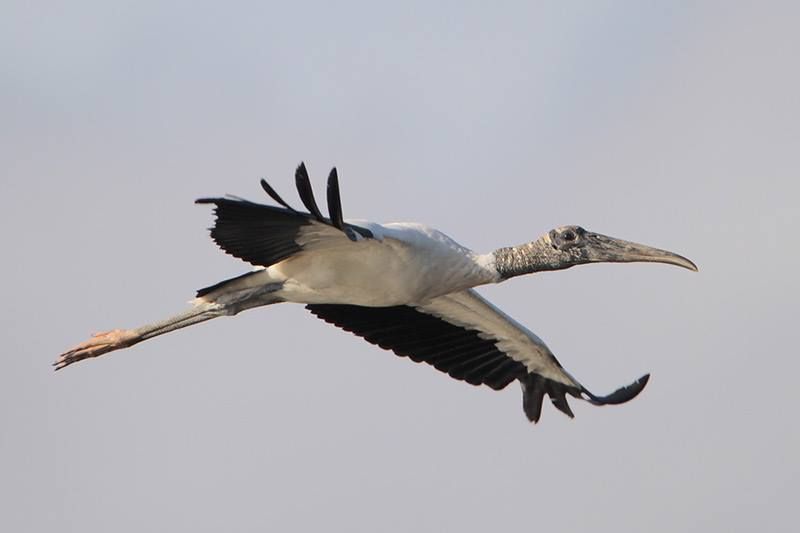 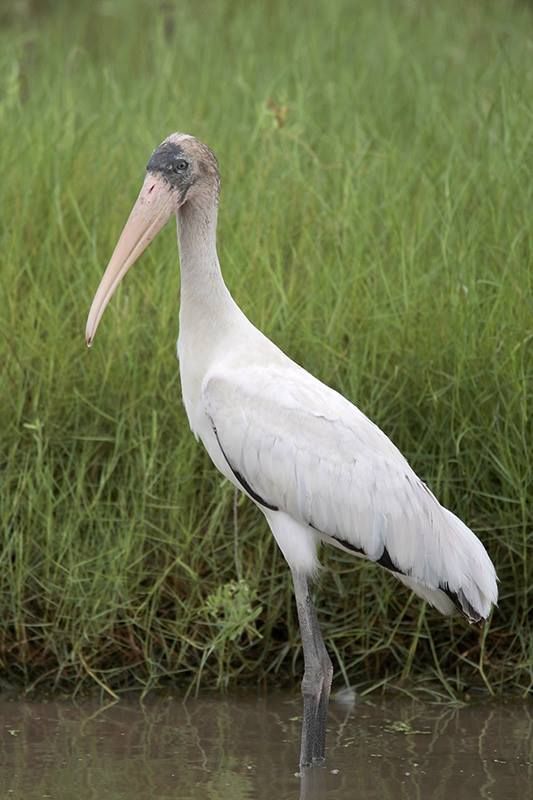