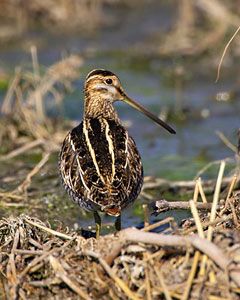 Seasonal Occurrence: Common October through April. Does not nest in our area.

Notes: While snipes may be secretive and difficult to find, if you persistently search in the right places, you may just find one this winter. You should look for a chunky, mid-sized shorebird with short legs and a long bill. They are mostly brown with a boldly striped head and back, a white belly and a rusty-red band on the tail.

This abundant and widespread species breeds throughout Canada and the northwestern United States and winters throughout the rest of the US all the way down to northern South America.To find Wilson's Snipe you'll have to journey to a wet, open habitat such as a marsh, pond, or flooded field, where they can hide in the short, thick vegetation. They forage here at dusk and dawn by repeatedly probing the mud for invertebrates with their long, flexible bill. You most likely won't see them until you are right on top of them and they suddenly flush. They will often call out with a sharp 'scaipe' as they depart in a quick, erratic flight. Check their eBird range map to see where they have been spotted recently. You don't necessarily have to travel outside Houston to find them!

This shorebird has several interesting characteristics, including how it's eyes are placed so far back on its head that it can see not only to the front and sides, but behind. This comes in very handy when their bill is pointed down deep in the mud, and they are vulnerable to predators. The 'winnowing' sound they make during their elaborate, circling and diving courtship display is caused by their fanned outer tail feathers.