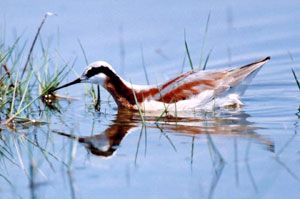 Notes:  The Wilson’s Phalarope is a small shorebird found throughout Texas during migration. They winter in South America- mainly on high mountains lakes in the Andes- and breed in the northwestern United States and Canada.

Wilson’s Phalaropes have long legs, slender necks and very thin, long, straight bills. In non-breeding plumage, Wilson's Phalaropes are gray on their upper body and white on their underside with no strong facial markings. During the breeding season, these grayish birds have cinnamon highlights on their necks and backs, and a dark line over their eyes which extends down their necks. These cinnamon highlights and dark lines are much more pronounced in females than in males, the opposite of the norm for most bird species. In fact, Wilson's Phalaropes reverse the usual sex roles in birds, with the females being larger and more colorful, leading courtship behavior, and leaving males to incubate the eggs and raise the chicks.

Wilson's Phalaropes can be found in prairie lakes, fresh marshes, and mudflats but during migration, they will also stop off in salt marshes and ponds. The best places to look for these birds locally are Rollover Pass and Oilfield Road in High Island, both on the Bolivar Peninsula.