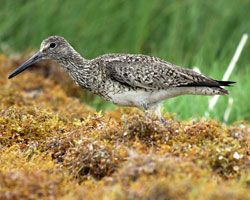 Notes: A large stocky bird with long legs and a long, straight beak, the Willet is most easily recognized by its loud, ringing pill-will-willet call, and by the striking black and white pattern on its wings, which is only visible in flight. At rest the Willet is, in contrast, a rather drab brownish-grey bird, with a white rump and tail. Their wings are broader and rounder than those of many shorebirds and the tail is short and squared off at the base. Learning to recognize a Willet will help when identifying other shorebirds.

When startled, they react with a piercing call, often opening their wings and running rather than taking flight. Young Willets are able to feed themselves from the day of hatching, and leave the nest after just one to two days. Although both adults care for the chicks, the female abandons the brood after about two weeks, leaving the male to continue caring for the young for at least another two weeks. 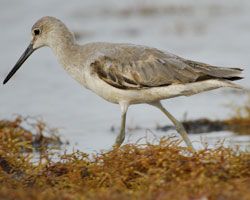 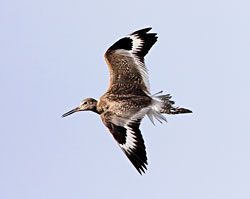