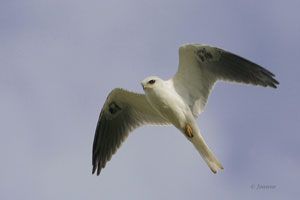 Seasonal Occurrence: Common throughout the year. Breeds in our area.

Profile by Jess McClean:  The White-tailed Kite is a medium-sized hawk which is resident in the United States along the Pacific coast from southern Washington to California and along the coasts of Florida, Louisiana and Texas. Adult White-tailed Kites have gray backs and wings, long, white tails and white undersides and faces with striking red eyes. There is no difference in plumage between the sexes. Juveniles are very similar to adults in appearance but have buffy streaks on their breasts and heads, scalloped gray feathers on their backs, and yellow eyes. They can often be seen hovering up to 80 feet over grasslands while hunting for prey, primarily house mice and voles. This ability to hover midair without beating their wings is so characteristic of kites it is known as 'kiting'.

White-tailed Kites engage in spectacular courtship displays during the breeding season in which a male offers an item of prey to a female before egg laying. The female then flies up to meet the male, turns upside-down, and grasps the prey in midair.

The Bolivar Peninsula is a great place to look for these birds either 'kiting' or perched on trees and wires.

Additional Notes by Daniel Elting: The White-tailed Kite is a medium sized raptor with white body and head feathers, black shoulder, and a distinct red eye. Their brilliant white feathers distinguish them from the similar looking but much duller gray Mississippi Kite.

Kites are often seen rapidly flapping their wings directly into the wind and hovering in place high in the air scanning for pray, this behavior has come to be known as “kiting.” White-tailed Kites prefer grassland, savanna, or marsh habitats where their kiting behavior is most effective, these birds are almost always seen hunting near a water source. They quickly dive down on their prey from their hovers to catch small mammals such as mice, rats, and voles.

White-tailed Kites typically nest in the upper third of trees that may be 10–160 feet tall. These can be open-country trees growing in isolation, or at the edge of or within a forest. White-tailed Kites have a spectacular courtship display where the male presents a prey item to the female, the female then flies up in the air to grab the prey from the male in mid-air. During the non-breeding season White-tailed Kites can be found roosting in trees in large over 100 birds.

White-tailed Kites have a relatively small range in the U.S., only occurring in Texas and along the Pacific Coast up to Oregon. They are seen in southeast Texas year-round, often seen sitting along power-lines or hunting via their patented “kiting” strategy. 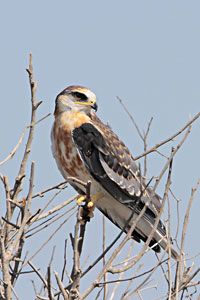