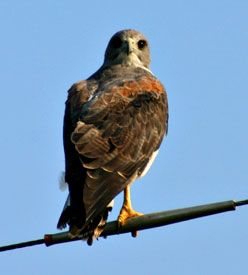 Notes: A thick-bodied, midsized raptor, the White-tailed Hawk has gray upperparts, white underparts, black wings that extend past the tail at rest, yellow legs, a gray bill, and a chestnut shoulder patch. Its white tail with a black band near the tip is unique among North American hawks. Juvenile birds have a darker head and back, dark barring on the lower belly and legs, and thinner wings and a longer tail. A juvenile bird has a tail up to 15% longer than an adult.

Occupying discontinuous breeding areas from southern Texas to Argentina, the White-tailed Hawk claims the widest latitudinal distribution of any Buteo and has successfully colonized several Caribbean islands. The White-tailed Hawk is at the northern limit of its range on the Upper Texas Coast.

White-tailed Hawks nest in our area. The best sites to observe them are the Attwater Prairie Chicken NWR, Brazos Bend SP, and Aransas NWR.
- Vicki Stittleburg