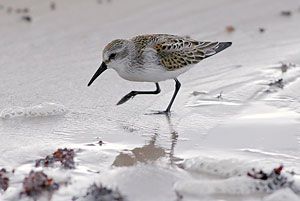 Seasonal Occurrence: Common in fall; abundant in spring and winter.

Notes: The Western Sandpiper is one of the most abundant shorebirds in North America. It is a small sandpiper, weighing only around 0.8-1.2 ounces, with a short neck and moderately long bill that has a slight droop. Their rump and tail have a black center while their back is gray-brown with some reddish coloring and their chest is lightly marked. Their breeding plumage includes a chestnut back, crown, and face.

Western Sandpipers nest mainly in the coastal sedge-dwarf tundra of Alaska under low shrubs or grass clumps. The nest is made by the male and is a shallow depression in the ground that is sparsely lined with sedges, leaves, and lichen. Their average clutch size is 4 eggs and incubation is done by both adults for around 21 days. Females may leave before the eggs hatch as the females often leave the male to care for the young. However, some females will stay for a few days after the chicks hatch. The chicks are precocial and often leave the nest only a few hours after hatching. They can find food on their own, but rely on the male for protection from predators and warmth. The chicks are usually able to fly within 17-21 days of hatching. During the breeding season Western Sandpipers often feed on flies, beetles, spiders, and small crustaceans.

After the breeding season is finished Western Sandpipers often migrate down the Pacific Coast, but many travel to the Atlantic Coast as well. During the winter they can be found on shorelines, mudflats, sandy beaches, and tidal estuaries. During the winter their diet can vary depending on their location. While on the coast they may eat amphipods, small mollusks, marine worms, and insects. Those that are more inland will eat mainly insects and some seeds.

Western Sandpipers can be found in large numbers along the Texas coastline throughout the winter months. They can often be found foraging in the mudflats and resting in the wrack. Come on out and try and find this small shorebird yourself!