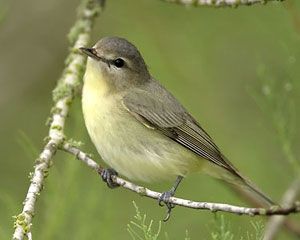 Notes by Susan Billetdeaux: Warbling Vireos prefer to remain high in the treetops, and that, combined with their muted coloring, makes them difficult to spot. Notice the dark eye which is prominent in a pale face. Warbling Vireos look quite similar to Tennessee Warblers and Philadelphia Vireos and thus require careful identification. All these species lack wingbars and are a soft gray on top. Philadelphia Vireos tend to have more of a yellowish cast below and Tennessee Warblers are smaller with thinner bills.