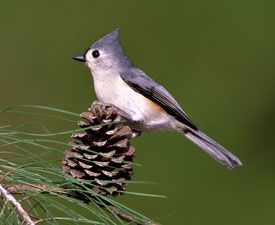 Profile by Richard Gibbons:  The Tufted Titmouse is a small gray bird that is related to the chickadee. They have a large head and eyes as well as a thick neck, pointed crest, stout bill, and full body. Their coloring is a soft gray on top, white on bottom, a rusty streak down its flanks and a black patch just above their bill. The Tufted Titmouse song is a fast clear whistle that sounds like Peter-peter-peter. This song is repeated up to 11 times in quick succession. Their most common call is a scratchy tsee-day-day-day.

Tufted Titmice can often be found in eastern woodlands below 2,000 feet in elevation. They are mainly found in deciduous forest with tall trees, but can also be found in mixed forest. While foraging in these woodlands they can be seen hanging upside down and sometimes hovering momentarily to snatch insects which comprise up to two-thirds of their annual diet. In the summer they mainly consume caterpillars, but will also eat wasps, bees, sawfly larvae, beetles, scale insects, spiders, snails and insect eggs, and pupae. In the winter seeds, nuts, berries and small fruits are important to their diet. This is why they are also often common visitors to feeders in backyards, parks, and orchards. Like their relatives the chickadees, Tufted Titmice hoard food in the fall and winter. When taking food from a feeder they will usually shell the seed and store it within 130 feet of the feeder.

Tufted Titmouse pairs often remain together throughout the winter in their territory. They may join a small flock of other titmice, but these flocks will break up in late winter in order to establish nesting territories. It has been observed that one of the young from the previous breeding season may stay with the pair throughout the winter and on rare occasions remain with them to help care for the new brood of chicks in the summer. The female will lay around 5-6 eggs, sometimes 3-9, in a hole in a tree that hatch in approximately 12-14 days. These holes are either natural cavities or old woodpecker holes that are on average 35’ above ground. The female stays with the chicks for most of the 15-16 days until they leave the nest, but will leave them once they are older to help gather food.
The Tufted Titmouse is usually a permanent resident in both the north and south parts of the eastern half of the United States. Young birds will sometimes disperse from where they hatch in any direction. It is believed that feeders are helping this species expand its range; specifically in the northern parts of its range.

Invite Tufted Titmice to Your Yard

If you have a wooded yard, your odds are good for attracting Tufted Titmice. They eat primarily insects, supplemented with nuts, seeds, and berries. They readily use sunflower seed feeders and suet feeders. Tufted Titmice use a tree cavity or nest box to construct their nest.