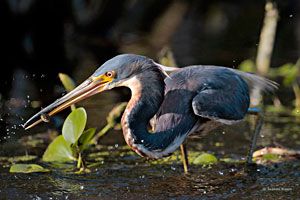 Seasonal Occurrence: Common in all seasons. Nests in our area.

Profile by Bryce Loschen: The Tricolored Heron, formerly known as the Louisiana Heron, is a medium-sized heron with a long, slender neck and bill. Adults are mostly blue-gray above, but are distinguished from other grayish herons by their white belly and white stripe down the front of the neck. In breeding plumage Tricolored Herons develop small white plumes extending from the back of their head and fine buff plumes on their back and neck, and the base of their bill becomes tinted blue. Juveniles are similar in appearance to adults, but have reddish necks with spots of reddish feathers on the wings and back.

Tricolored Herons are most common in estuaries, bay margins, brackish marshes, and tidal pools along the coast, with fewer numbers found in wetlands further inland. Look for them stalking through the marshes searching for tasty morsels including small fish, frogs, crustaceans, and insects. They are very active feeders and can often be seen dashing through shallow water after prey items. Tricolored Herons are solitary feeders and will defend their hunting area from other wading birds.

Despite being solitary feeders Tricolored Herons will nest in large colonies with other wading birds. They build stick nests which can be in trees, mangroves, willows, thickets of dry scrub, or even on the ground depending on colony location. Males gather the materials while the females do most of the nest construction. Both parents take part in feeding the young.

Tricolored Heron range encompasses the coasts of eastern and southern United States, Mexico, Central America, the West Indies, and the northern coasts of South America. They are residents on the Texas coast so you can find them wading through the marshes year round! Look for them stalking the tidal pools at Bolivar Flats shorebird sanctuary during the day, or roosting in the evening with a whole host of other herons and egrets at the Smith Oaks Rookery in High Island. Come on down and see them for yourself! 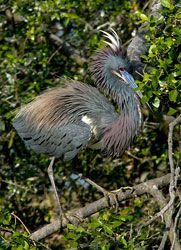 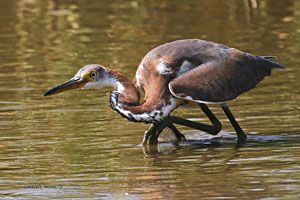