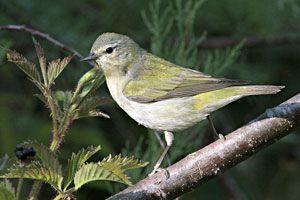 Profile by Glenn Olsen: Spring migration was underway on an early April morning as those in my warbler identification class walked toward Boy Scout Woods. Just ahead, bright colors flashed as a male Baltimore Oriole flew across the road and into an Australian bottlebrush. I called out for everyone to look at the bottlebrush as more birds flew into it. The shrub looked like a Christmas tree adorned with colorful ornaments of Baltimore Orioles, Orchard Orioles, Tennessee Warblers, and the bright red flowers of the shrub. Both orioles have distinctive color patterns and are easily identified, but the Tennessee Warbler’s color pattern is subtle, and this species often presents identification challenges.

Like many warblers, the Tennessee is most often moving about in a tree or shrub searching for food; and getting a good look is not easy. The overall image is a thin, sharply pointed bill, a small body, short tailed, no streaks, or spectacles and no wing bars on the bird. The gray crown and nape of the male is distinct and contrasts with the olive green to yellow green upperparts of the bird. The entire underparts are off white to gray-white. The male’s facial pattern is a key for me, namely a thin bill, a thin white eyebrow, and a thin gray eyeline with a white to pale grayish face, and gray crown. The female is similar but much paler with less contrasting color and most often has a yellowish tinge of color on the upper breast and throat. I think that the color pattern of the Tennessee most closely resembles some vireos, like the Philadelphia, Red-eyed and Warbling. But a close look at the bill of the Tennessee, that is fine and needle-sharp, eliminates any species of vireo.

We most often see Tennessee Warblers during spring migration, primarily mid to late April, as they head to their breeding grounds in Canada and the northern U.S. So this April take up the challenge of finding, identifying, and enjoying the subtle beauty of a Tennessee Warbler as it passes through.

Comments by Don Verser: Some first fall Tennessee Warblers can have very yellowish underparts and look quite different from spring birds. These can be easy to mistake for Orange-crowned Warblers. Always look at the undertail coverts which should be distinctly white for Tennessee and yellow on Orange-crowned.