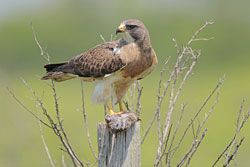 Seasonal Occurrence: Most common spring and fall. Rare in winter. Small numbers nest in our area. 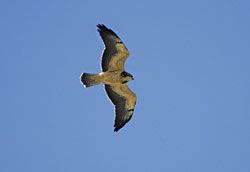 Profile by Glenn Olsen: This absolutely gorgeous hawk is most frequently observed in our area during the fall. In August it begins migrating out of North America enroute to wintering grounds in South America, primarily Argentina. This 10,000 kilometer migration is thought to be the second longest migration for a raptor. Tundra breeding Peregrine Falcons are known to travel farther.

We normally observe this species in flight, and I especially enjoy the adult light plumage phase. Long, slender wings for a buteo; chestnut bib, white throat, white body and white leading half of the wing and dark trailing half of wing in contrast against a blue sky is a stunningly beautiful image ! To add a little extra challenge to the identification of this species, there is a dark color phase and an intermediate color phase, both being quite different in color from the light phase. Naturally, that's when knowledge of wing and body shape structure, tail pattern, and flight pattern proves valuable. It frequently holds the wings in a dihedral similar but not identical to Northern Harrier or Turkey Vulture.

In September, the prime month for raptor migration in our area, lone birds or small to large groups may be seen in the sky, gradually drifting southward.

Swainson's Hawks nest primarily in the prairies, grasslands, and agricultural fields of the western half of the U.S. and Canada. The largest breeding numbers occur in the Great Plains area. They breed in Texas, mostly in the northwestern part of the state. Small numbers also breed in the Houston area. Nests are found in solitary trees or large shrubs, small groves bordering fields, or trees of riparian areas. This bird is quite beneficial as its diet consists mainly of small mammals, rodents, grasshoppers and other insects. It consumes insects such as dragonflies, when in flight.

Swainson's Hawk is named after William Swainson (1789-1855) who was an English naturalist, collector, and author of several books about birds. 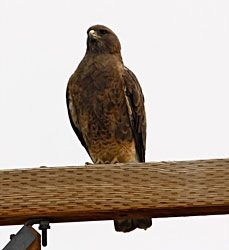 Swainson’s Hawks are birds of open prairies and farmlands of the American West. During the breeding season Swainson’s Hawks eat mostly small mammals such as squirrels, mice, and rabbits. They will also eat bats, snakes, lizards, and birds. Outside of the breeding season their main food source becomes insects such as crickets, grasshoppers, dragonflies, moths, and beetles. They often forage on foot running after insects and small mammals with wings partly outstretched, or sometimes by hovering or soaring over fields, often following agricultural operations that bring up large numbers of insects. Pairs usually construct nests in a solitary tree or in a small grove of trees in an open area along a stream. Sometimes pairs will build their nest on top of an old magpie, crow, or raven nest. Nests are a platform of sticks, lined with finer twigs and weeds.

Swainson’s Hawks breed in the grasslands and farmlands of the western United States including West Texas primarily, but increasingly they are making inroads eastward. Swainson’s now regularly nest in urban Houston and southeast Texas.

Once the breeding season is over they will group up in huge flocks called “kettles” numbering in the hundreds or even thousands to head to the wintering grounds in Argentina. They will often mix with other species like Broad-winged Hawks and Mississippi Kites in these kettles. Some will travel through the Texas coast on their migration route. The Smith Point Hawk Watch is a great place to see Swainson’s Hawks on their journey south during the fall so come on down and see these impressive raptors for yourself!

Profile by Phoebe Honscheid: Swainson's Hawks are uncommon, but increasing breeders on the Upper Texas Coast. During fall migration, we have a great opportunity to see enormous swirling flocks, or kettles, of Swainson's Hawks passing through. These prairie specialists have one of the longest migrations of North American raptors, with some birds flying more than 10,000 miles to their wintering grounds in Argentina. They leave their breeding grounds from August to October and arrive around two months after their journey began.

Whereas other Buteos of similar size feed on rodents and small mammals, a significant portion of the Swainson's Hawk's diet comes from insects, including grasshoppers, dragonflies, and crickets. However, they also catch mammals and reptiles in the summer. A common hunting strategy for these raptors is to soar above tractors in search of fleeing prey.

Swainson's Hawks are generally found soaring in open areas like prairies, fields, and farmland, where they can easily spot their prey. Because of this, they have become an icon of the Great Plains, although their range extends from California to Texas, all the way north to Alaska.

There are two main color morphs of Swainson's Hawks: light and dark, although there may be considerable intermediate plumage. The more common light morph birds have a characteristic light brown bib that is easily recognizable in flight. They have faint orange barring on their flanks, a pure white throat, white underwing coverts, and a gray-brown head and back. Only 10% of Swainson's Hawks are dark morphs, which are completely dark brown with rufous undertones. Both light and dark morphs have white undertail coverts, long and pointed wings, and a slender profile. 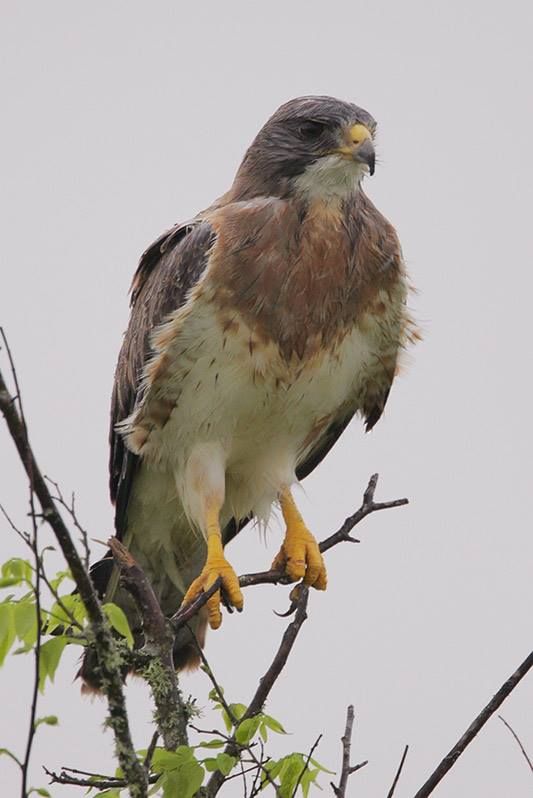 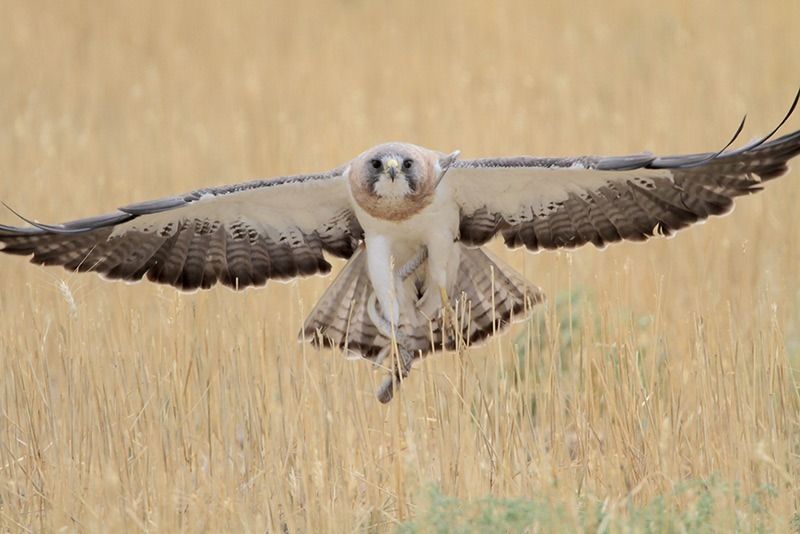 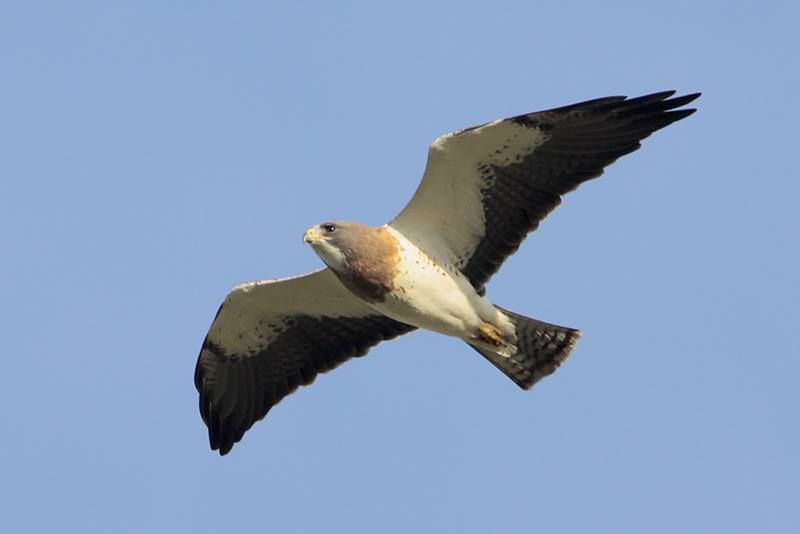 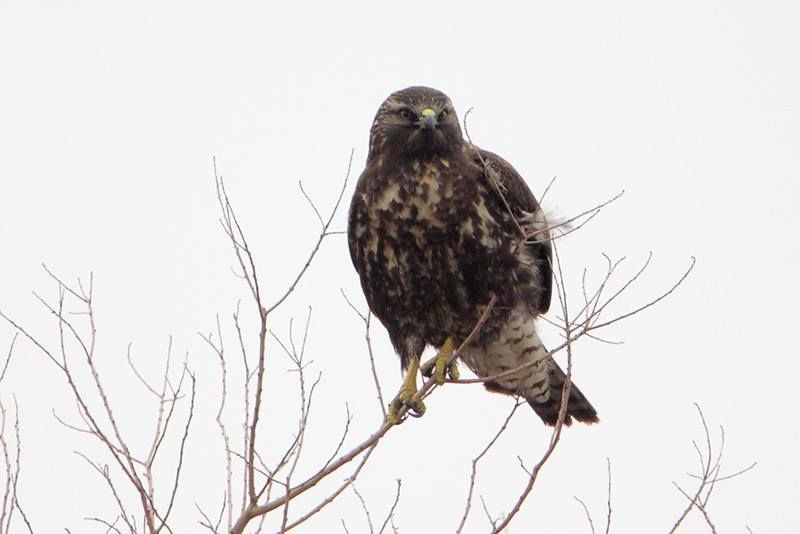