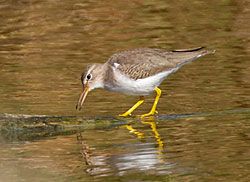 Notes: Whether it be their distinctive breeding plumage, or perceptible behavior, the Spotted Sandpiper will make an indelible impression. The Spotted Sandpiper is a mid-sized shorebird with dark brown upperparts, a white underbelly with scattered, bold black spots, yellow legs, and an extended, barred tail. They have a white eyebrow that leads to an orange bill, which is straight, pointy and faintly shorter than its head. During non-breeding season, the Spotted Sandpiper will lose its spots, change its upperparts to a grayish/brown color, and the bill will be slightly yellow, rather than orange.

Since it can be hard to discern the Spotted Sandpiper from other sandpipers during winter, watching their behavior may allow for easier identification. Most notably, this sandpiper’s rear body teeters regularly, like a seesaw. In flight, you can watch for their quick, crisp wing beats or the white stripes on the wings. The Spotted Sandpiper is commonly found near freshwater, but can be found almost anywhere near water, and is often solitary.

Unlike many shorebirds, the Spotted Sandpiper sometimes, but not always, practices polyandry. The female of this species will arrive at the breeding grounds before the male to establish a territory. After males arrive, the female can mate with up to four males during a breeding season and will leave them to care for the eggs and young. The reasoning behind this change in gender roles may have to do with their increased testosterone levels. While the males have up to 10 times more testosterone than the females, the females experience a sevenfold increase during breeding season.
-- Abby Ficklin 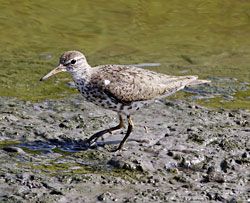