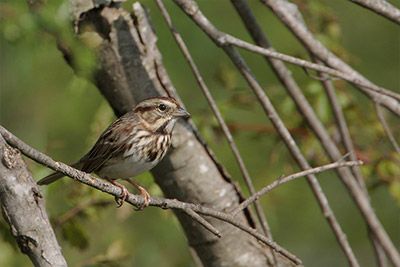 Notes: Song Sparrows occur throughout the United States. Since they are relatively tame and tolerant, they are also one of the most approachable. They are often found in backyard gardens. They prefer areas with dense, low cover. The best clue to their presence is their song, which is readily identifiable. It consists of usually three short flute-like notes followed by a descending trill of sounds. There is a great deal of color variation in plumage patterns. Look for a small patch of dark feathers on their streaked chest resembling a stickpin. The coloring is close to a Savannah Sparrow, but the tails of Song Sparrows are much longer.
- Susan Billetdeaux