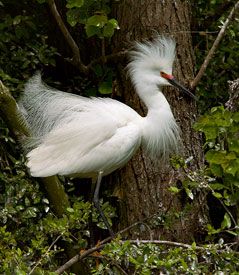 Notes by Vicki Stittleburg: A medium sized heron, the Snowy Egret is all white with a black bill, black legs, and yellow feet. They have a patch of yellow skin at the base of the bill. Immature Snowy Egrets have duller, greenish legs.

In breeding season, the egret's facial skin turns reddish, its feet deepen to orange, and long plumes extend from its neck to its back. The delicate, curving breeding plumes were in high demand for the fashion industry; in 1886 these plumes were valued at $32 per ounce, which was twice the price of gold at the time. Plume-hunting nearly drove the Snowy Egret to extinction. Thanks to early conservationists who rallied to protect egrets and got legislation passed that made the feather trade illegal, Snowy Egrets were able to make a strong comeback.

Snowy Egrets are commonly spotted along the edges of Houston's bayous and lakes. They prefer to feed in shallow water and eat mostly aquatic animals, including fish, frogs, worms, crustaceans, and insects. Using their feet to paddle in the water or probe in the mud, Snowy Egrets are able to round up prey before striking with their bills. They are also known for extending their wings over open water to create shade, which provides better visibility and may attract fish seeking shelter from the sun. 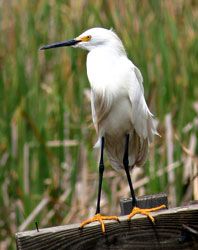 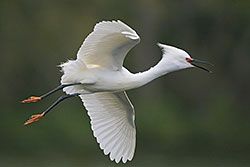 Profile by Maria Hart: The Snowy Egret is a conspicuous and elegant member of the heron family. Medium in build, this egret can be identified by its snow white coloration, lengthy sharp black bill, and strikingly yellow lore and feet. Adult Snowy Egrets develop long and wispy plumes on their back, head, and neck during the breeding season. While typically a quiet bird, Snowy Egrets can be quite chatty at their breeding grounds as they emit harsh and raspy calls and squawks to ward off potential competition or predators.

During both the winter and breeding season, Snowy Egrets can be found in a variety of aquatic habitats along the three coasts of North America. These habitats include mangroves, ponds, lagoons, swamps, beaches, and wet fields. While breeding, this species of egret is found cohabitating with other wading birds in dense colonies. Within these colonies, shallow, oblong nests are built in dense vegetation such as trees, shrubs and vines using twigs, grasses, and moss. In the past, Snowy Egrets have even been observed hybridizing with other herons including Tricolored, Little Blue, and Cattle egrets.

The diet of a Snowy Egret includes mostly aquatic animals including fish, small amphibians, worms, crustaceans, and insects. They are often very active in their foraging habits as they use their brightly colored feet to stir up any appetizing critters hiding within the mud below the water’s surface.

Snowy Egret populations faced serious decline amid the 19th century as a result of hunting. Their delicate plumes were highly sought after as an embellishment for women’s hats. Flourishing public outrage put an end to this around 1910 and paved the way for various protection laws such as the Migratory Bird Treaty Act.

Snowy Egrets nest in the spring in the rookery at Houston Audubon’s Smith Oaks Sanctuary on High Island. Eggs start to hatch in late May so make sure to visit High Island to see the adorable chicks for yourself. 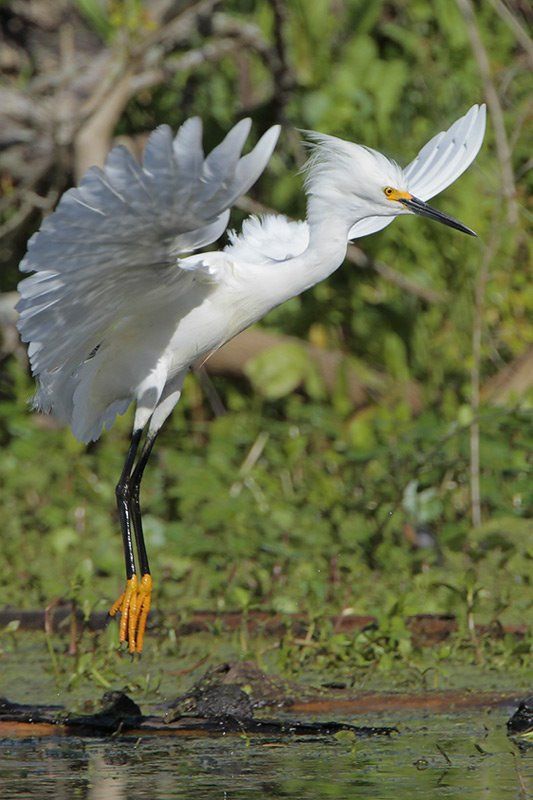 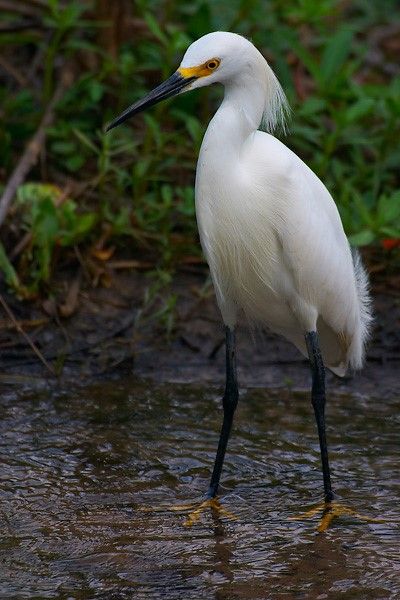 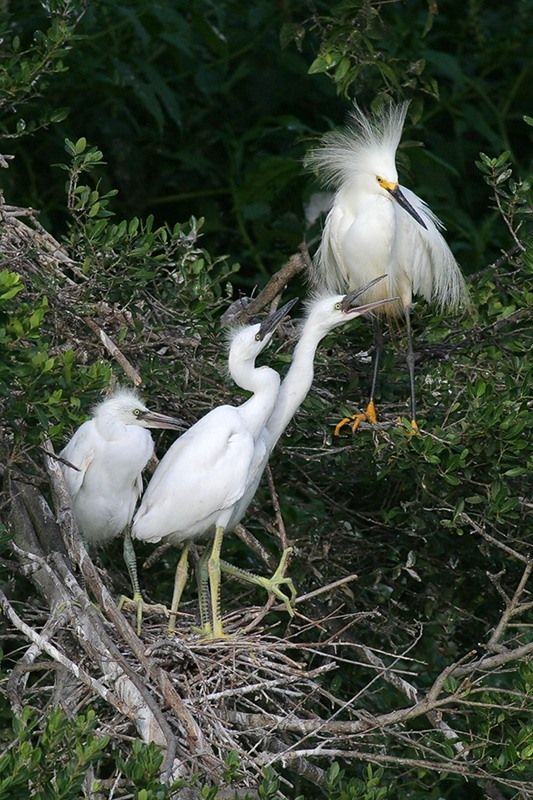