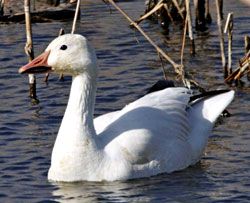 Profile by Glenn Olsen: One of the spectacular birds that winters here is the Snow Goose. This species has an interesting history. As birders know, the Snow Goose occurs in two basic morphs, viz. one with a white body and black-tipped wings and one with a blue-black body and a white head. There is more variability in the plumage color of the darker morph with varying amounts of white. We derive the common name of Snow Goose from the white morph. The dark morph is commonly referred to as Blue Goose, a nod to the species name. Caerulescens is Latin for cerulean or blue.

Before 1957, the Blue and Snow Geese were considered two separate species. I don't think the geese were confused about this, but the taxonomists were unsure. Before then the two species had widely separate breeding and wintering ranges. But as humans changed the habitat, especially that along the migratory route and the wintering habitat, the geese began to mix and mate on a regular basis. Scientists have since learned that the blue morph is due to a recessive gene and they are the same species. Additionally, at one time there was another population that was noticeably larger and known as the "Greater Snow Goose" C. c. atlanticus. Then we had the Lesser, Greater, and the Blue. But today they have all been "lumped" together as one species.

We do not have as large a population of wintering Snow Geese now as we did twenty years ago even though the overall population of the species is at an all-time high. This is due largely to loss of the rice farms that once dominated the Katy area. But the area is still a good location to find Snow Geese beginning mid-October when a few early migrants arrive. Greater numbers begin arriving toward mid-November and remain until around the end of February. During this time it is possible to see flocks of Snow Geese numbering in the thousands. What a sight! And the cacophony of a large flock of Snow Geese landing or taking to the air is a symphony to my ears. 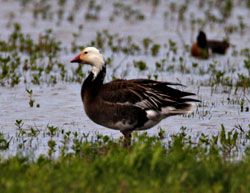