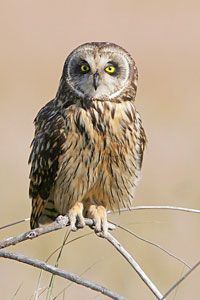 Profile by Glenn Olsen: The Short-eared Owl is an uncommon winter visitor to our area. It is not easily found but searching for one is a great reason to get outdoors. The most productive months to conduct your search are November through March. Primary sites include open grasslands such as those we find on the Katy Prairie Conservancy properties, Attwater National Wildlife Refuge, weedy fields, grass strips of small airports, coastal marshes and sometimes agricultural fields with stubble.

This is a medium-sized owl (roughly the size of an American Crow) whose color pattern ranges from pale brown to dark brown mottled upper parts with off-white underparts to tawny-buff underparts with brown streaks. The facial pattern is usually distinctive with a pale colored face and darker area around the eyes. Look for this owl about an hour before darkness settles over the fields or just as daylight creeps into the day. Simply use your eyes to scan for a bird flying just a few feet above the field. It is slightly smaller than a Northern Harrier which shares the same habitat and has a similar hunting style. The owl can be distinguished from a harrier by its lack of white rump, larger head, and more rounded wing tips. If you see it flying away from you, just wait patiently as Short-eared Owls often crisscross or make circular routes over the field.

They hunt primarily small mice, voles, rats, shrews, rabbits and even birds if the opportunity to catch one presents itself. Sometimes, especially on overcast days, this owl may be found hunting at other times of the day but in the same habitat as described. Short-eared Owls breed in the northern third of the U.S. and into Canada and Alaska. They winter throughout the southern half of the U.S. and Mexico.

Profile by Maria Hart: The Short-eared Owl is a medium-sized owl with sandy coloration, brown mottling, and heavy streaking. They have a round head with dark eye patches and striking yellow eyes that contrast with their pale face. As their name suggests, Short-eared Owls have tiny ear tufts although they are typically only visible when an owl is excited or alarmed.

Short-eared Owls are one of the few members of the owl family to be seen active during daylight, especially near dusk as they fly low over marshes and fields looking for a meal. Similar to other owl species, the Short-eared Owl’s diet primarily consists of small mammals such as mice and voles. While inhabiting coastal and island regions, Short-eared Owls have also been known to prey upon other birds such as shorebirds and rails.

During the winter months, Short-eared Owls can be found throughout the US. However, the distribution of this owl species varies as they tend to travel to areas of high rodent populations. They typically inhabit areas of open-country such as grasslands, prairies, and both salt and freshwater marshes.

When it is time to breed, males perform a lively display of courtship. When a suitable female is near, the interested male will launch himself several hundred feet into the air flapping his wings upward in tight spirals until he finally makes a dramatic descent while clapping his wings and making a short “hoop” call. If this display is successful, females will begin to construct a nest on dry ground surrounded by short vegetation. The nest itself is often just a simple bowl scraped out of the ground. Nonetheless, the nest is still remarkable considering the Short-eared Owl is one of very few owls in the world to construct a nest at all.

When food is abundant Short-eared Owls may decide to stay and nest in their chosen wintering grounds rather than make the long journey back north to the Arctic so with some patience and a watchful eye you can find one for yourself flying low over a field scavenging for a meal. 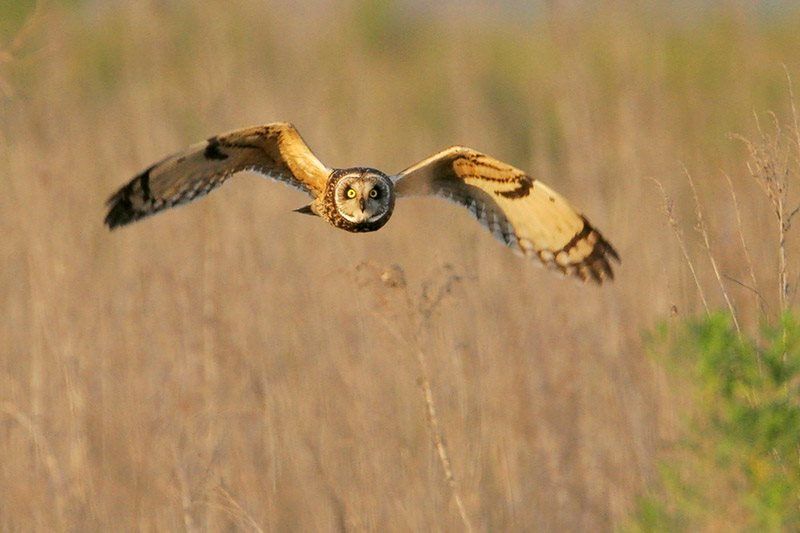 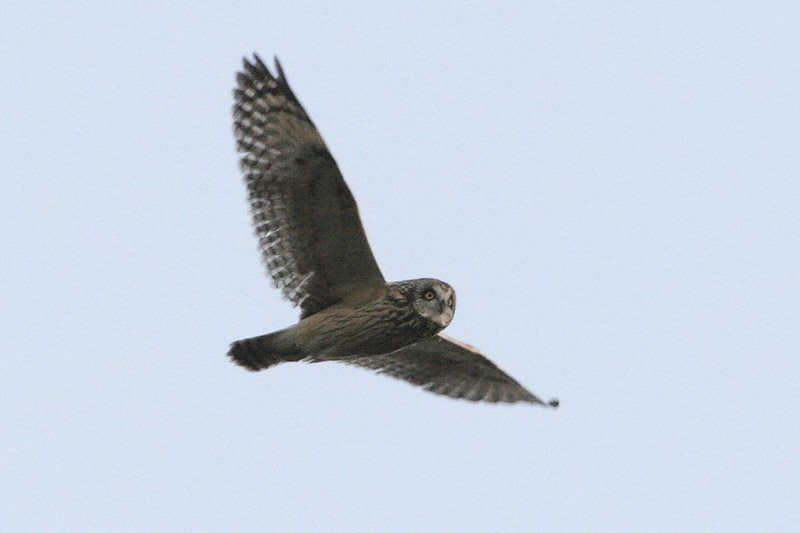