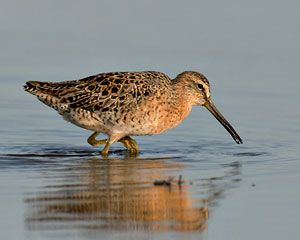 Short-billed Dowitchers diet consist of almost exclusively small water invertebrates; in the winter they are usually seen probing through coastal saltwater mudflats. They forage deeply and rapidly, their foraging style is often compared to a “sewing motion.” Short-billed Dowitchers will forage in water depth up to their belly, and for most of the invertebrates they eat they will capture and swallow the prey without even lifting their head.

Short-billed Dowtichers breed in Alaska and northern Canada in the taiga and subarctic tundra. Nests are a shallow depression on the ground lined with small twigs and sticks, usually found in a bog. Three to four egg are incubated for 21 days by both sexes of the breeding pair. Like many shorebirds, Short-billed Dowitcher young are precocial. This means they are a mobile very shortly after hatch, and must do all their foraging for themselves. Because of the isolation of their breeding grounds, little is known about the details of parental care and fledge times for this species.

Short-billed Dowitchers are highly abundant and winter on the majority of the coastline of the United States. These birds are seen most days at our Bolivar Flats Sanctuary on the Gulf Coast; come visit the sanctuary and see if you can spot them “sewing” through the expansive mudflats!