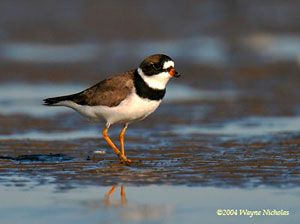 Notes by Richard Gibbons: The Semipalmated Plover is a small shorebird with a short stubby bill, round head, and orange legs. This plover has a single dark complete breast band. This band lightens but is still present in the winter, which helps distinguish it from other species of small plover. Breeding birds have a black cap and a distinctly two-toned black and orange bill.

Although they occur in similar habitats, plovers are not considered a type of sandpiper. Plovers have rounder heads and shorter bills than sandpipers and have a much different foraging style. Semipalmated Plovers like other plovers use a “stop and go” foraging strategy across sandy or muddy substrate on shorelines. They move from one spot to another picking small invertebrates off of the surface; this is unlike the “probing” that sandpipers do when they forage.

Semipalmated Plovers breed in the arctic of Canada and Alaska. Unlike many North American shorebird species, Semipalmataed Plovers do not nest in the tundra habitat of the arctic, instead looking for gravelly substrate on river banks or around ponds. This sort of substrate conceals them and their eggs well from predators. Nests are small scrapes made on the ground sometimes lined with small twigs; nests typically contain 4 eggs that are incubated by both sexes for 23-25 days. Semipalmated plover numbers are very stable and possibly even increasing, this is in stark contrast to their close relatives the Snowy Plover and Piping Plover which are heavily managed throughout North America because of their significant declines due to nesting habitat loss.

During migration, Semipalmated Plovers are seen in every state across the continental U.S; they winter along the Pacific, Atlantic, and Gulf Coasts of the U.S. and Mexico. Dozens of Semipalmated plovers winter at our Bolivar Flats Shorebird Sanctuary.