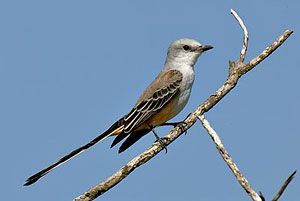 Seasonal Occurrence: Very common April through October. Greatest numbers in April, May and September. Breeds in our area.

Profile by Gislaine Peters:  Have you been noticing a slender flycatcher with gray and salmon-pink coloring and an extremely long and deeply forked tail perching on utility lines, treetops and fence lines? That would be the Scissor-tailed Flycatcher! They are currently forming large flocks in preparation for fall migration. As with many birds the males are more intensely colored than the females, but they also have longer tail feathers as well. They are pale gray with black wings and black tails with a white edge. The salmon-pink color is located on their flanks and extends to their underwing. On average the Scissor-tailed Flycatcher is 14 inches long and approximately half of that length can be credited to their tail.

The Scissor-tailed Flycatchers nest is a complex structure. When it comes time to breed the female will often build the nest on her own, escorted by the male, over the course of a couple days. However, some birds have been found to spend weeks building their nest. Their nests are made up of a frame of course materials such as plant stems and flowers, wool, tissue, paper, string, thread and cotton. Then an inner cup, approximately 3 inches across and 2 inches deep, is created using closely knitted cudweed flowers, string, cloth and cotton. She will sometimes add wet soil, caterpillar cocoons, sheep wool, grass leaves, cedar bark, chicken feathers, cigarette filters, paper or carpet fuzz. To finish the nest she lines it with tightly woven dried roots, thistledown, cotton fibers and wooly cudweed leaves.

The pair will produce 3-6 white or creamy eggs with dark red, reddish brown or purple blotches. The eggs hatch in approximately 13-23 days and the helpless young fledged around 14-17 days. During the breeding season Scissor-tailed are known to be extremely territorial and have been known to attack many other bird species such as Red-tailed Hawks, Swainson’s Hawks, Turkey Vultures, Great-tailed Grackles, American Crows and Blue Jays.

They breed from eastern Colorado and Nebraska south to Texas and western Louisiana. Their winter range extends down into southern Mexico and Central America and they can be occasionally found in southern Florida. They prefer open areas with scattered trees, shrubs and patches of brush, but can also be found in towns, farm fields, pastures and landscaped area. They tend to spend their winters in humid savannas, pastures, agricultural lands, scrublands, towns and at the edges of tropical deciduous forests.

Many Scissor-tailed Flycatchers have been observed in and around our sanctuaries so come on out and see if you can spot one yourself!