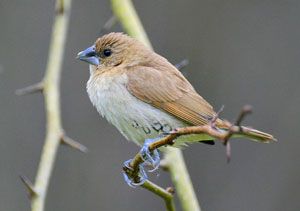 Sighting Reports Request: Daniel Brooks, Ph.D. of the Houston Museum of Natural Science is conducting a study of exotic species in Texas: Egyptian Goose, Mute Swan, Monk Parakeet, Scaly-breasted Munia, Orange Bishop, Red-vented Bulbul. If you see any of the species mentioned above, please fill out a report form. See link below.

Profile by Fred Collins: The Scaly-breasted Munia is also known as Nutmeg Mannikin or Spice Finch. They are native to Southeast Asia and have been a popular cage bird for likely 100s of years. They are well established in many places around the world. They were introduced into Hawaii in 1865. It is widespread on the east coast of Australia where in was introduced around 1930. It has also been introduced to Japan, the United States, Jamaica and into many islands in Polynesia. Currently these finches are imported in large numbers and retail for $10 or less in the Houston pet market. They likely wholesale from importers for $2-3 per bird. Among some cultures that are well represented in the Houston area, it is common practice to release finches at weddings and other significant family events. Such activity and the low price these birds command is likely the source of the birds we see. However, it is possible that the source is more natural and may represent immigration from locally established populations or even from Florida populations as was the case for Eurasian Collared-Dove.

In the continental U.S. they are established at least in Florida and California. In Texas they seem to be a recent addition to the avifauna of the UTC. I have solicited reports of exotic species in the Houston area on Texbirds and through other publications for a Houston Audubon Society's Citizen Science Project, but have had minimal response. Fortunately Cornell has adjusted their database so that this species can now be entered through Texas eBird. There were several reports during the Great Backyard Bird Count. If Texas birders would report sightings of this species we can begin to understand its distribution and abundance. In Southern California as in Houston it seems to have a propensity for urban and agricultural environs and seems to prefer floodways and detention ponds. In the Houston area, Harris County Flood Control and other governmental agencies are building extensive detention basins which often have cattail and vasey grass as dominate features. Other governmental regulations now require any sizeable development (5 acres) to build detention ponds. These are apparently ideal for the munia. Too, at least in urban settings, there are few native bird species utilizing these sites creating a "vacant niche" for the species to fill. I think it is highly likely that this species will become widespread within the next ten or twenty years. I have received reports from rural areas in Orange and Waller Counties. The Waller County report was of nest building. I would encourage all birders to watch for this species and report it when found.

Scaly-breasted Munias are widespread in SE Texas and in many urban areas across the southern United States. They have yet to be adequately treated in field guides to allow many backyard birders to identify this species that could turn up at a backyard bird feeder. The Scaly-breasted Munia Identification Chart was created by holding young of the year and photographing them weekly until they acquired adult plumage. Adult plumages have only minor sexual dimorphism. We have yet to determine the sex of the two birds we photographed. All photos in the series are by Kendra Kocab. The birds were captured in early fall and were almost uniform khakis-colored. They began showing spots in November but molt was very slow until May and then molt progressed rapidly to adult plumage in mid-July.