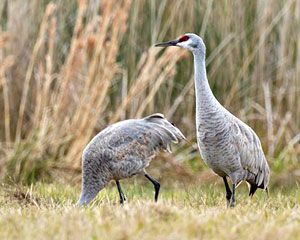 Preferred Habitat: May be found in wet fields in rural areas around Houston. The fields close to Brazos Bend State Park and Attwater National Wildlife Refuge are two good areas to look.

Profile by Glenn Olsen: What turned my eyes skyward was the loud but melodic and captivating calls that resonated in the clouds above. Often describe as bugling, but to my ears, it is more like a symphony of trumpeting horns and Swiss yodeling reverberating through alpine meadows from some fifties-era movie.

This harmonious calling of Sandhill Cranes in migration sent chills through me as the yodeling of a flock of Sandhill Cranes is to me one of the most stirring and beautiful sounds of any bird. This was the first flock and calls that I'd heard of the season as they migrated to the Upper Coast to spend the winter.

In flight the Sandhill Crane is easily distinguished from a Great Blue Heron (roughly similar in size and color) by the fact that cranes fly with neck fully extended and long legs trailing behind while the Great Blue Heron retracts its neck for long flights. The wing beat or flight pattern is also different, with the crane having a faster wing beat and the wings held flat and straight unlike the slightly cupped wings and slow, heavy wing beat of the Great Blue.

Gregarious by nature, we usually see small to large flocks feeding in fields, pastures, and coastal marshes. Adult birds are easily identified by the dull red crown, beret-like, on the lint-gray colored body with an odd-looking feather duster-shaped tail end. The feathers forming the duster are not the actual tail feathers but long tertial feathers that hang over the tail and are called a bustle. This structural feature alone is diagnostic on the three species of cranes that occur in the states.

We have the pleasure of seeing and hearing Sandhill Cranes during our winter months. Most of the Sandhills breed in Canada but some breed in various northern states. They leave their breeding grounds and begin arriving on the Upper Texas Coast in October, but the greatest numbers occur in December to February with a few lingering until the end of March. So a trip to any of our coastal marshes or a weedy field could yield a memorable experience with these winter residents. Join an Audubon field trip or register for the Holiday With The Cranes event in Galveston to improve your chances of an experience with these majestic birds.