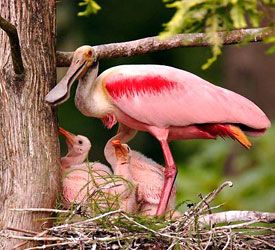 Seasonal Occurrence:  Common in all seasons.

Notes: Often mistaken for a flamingo, the Roseate Spoonbill has pink body feathers; pink legs; a white neck and back; an unfeathered, greenish head; red shoulders; an orange tail; and a long spoon-shaped bill. Juveniles are mostly white with pale pink wings and a white feathered head.

The exotic looking bird was hunted almost to extinction in the 1800s by plume hunters seeking their feathers for the millinery trade. Only 179 birds remained in Texas in 1920. Fortunately, Roseate Spoonbills were able to recolonize areas along the Gulf Coast, rebuild populations and make an excellent recovery.

In addition to their striking color and unusually shaped bill, the bird's odd feeding behavior, known as "head-swinging", also draws attention. Roseate Spoonbills forage by sweeping their bills in rapid arcs from side to side to stir shallow water into little whirlpools, which suck in aquatic organisms such as shrimp, small fish and aquatic invertebrates. Sensitive nerve endings along the bill's length detect vibrations and signal the bill to close quickly on the prey swept inside the spoon.

Roseate spoonbills are social birds, spending much of their time with other spoonbills and water birds, and nesting in colonies alongside ibises, storks, cormorants, herons, and egrets. The rookery at Houston Audubon's Smith Oaks Sanctuary is a great place to observe Roseate Spoonbills. 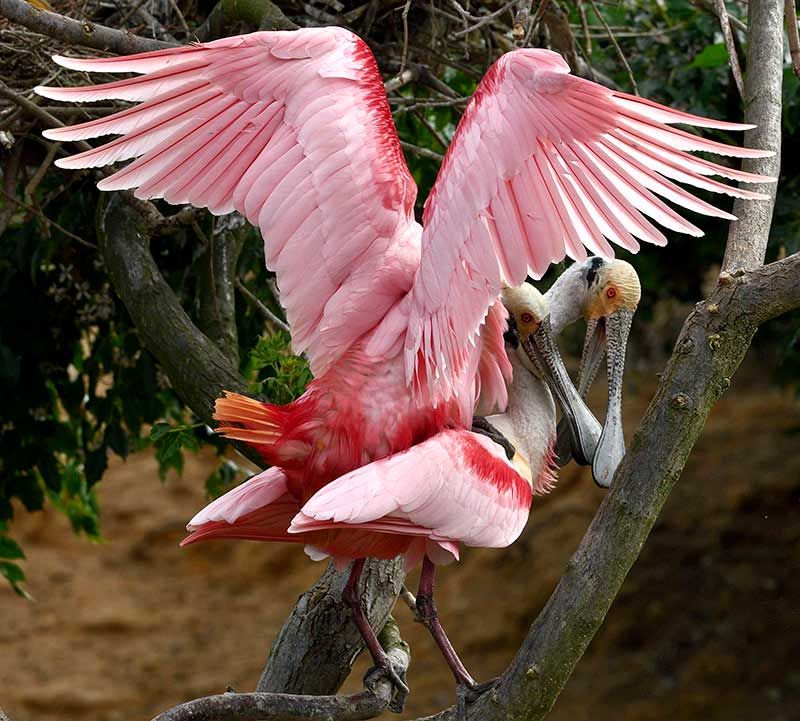 The Mating Spoonbills photo won 1st place in the Galveston FeatherFest first week contest. The winning photo was taken by Joseph V. Smith on our Board of Advisors, and appeared in the Galveston Daily News on Wednesday, March 13, 2019. The birds in the image are Roseatte Spoonbills. The picture was taken at Smith Oaks Rookery, High Island TX, Galveston County on April 4, 2018.

Profile by Ryan Call: Being married to a non-birder, I strive to make birding as easy and as convenient as possible for my family. I’m not always successful, of course — I sometimes return too late from a long day of birding or dally a bit on our family walks around Edith L. Moore Sanctuary, much to my wife’s chagrin. Usually, though, I manage my birding-related affairs fairly well. When we travel or hike, I bird when possible and try to involve my family in the pursuit as reasonably as I can without making the activity central to our journeys.

So, you can imagine my delight when — during a morning outing last summer to Arthur Storey Park — my wife pointed out a Roseate Spoonbill and said, “What’s that pink bird? I like it.” So, now, of course every time I see a Roseate Spoonbill while out with my family, I immediately tell Laura that she just has to see this bird; my children shout “Mom, it’s a Roseate Spoonbill, and it’s your absolute favorite bird!”

An unusual and flamboyant bird, the Roseate Spoonbill is, obviously most remarkable due to its rosy coloration; it often strikes an incredible and bright pose out there in the shallows among the other waterbirds. Its spatula-shaped bill also distinguishes it; this unique implement it uses to swish through shallow water in a back-and-forth manner in search of food, snatching up prey it feels against its beak. Most interestingly, Birds of the World reports that “prey item must contact spoon in order to be eaten though spoonbill may use tactile stimulation from other portions of the bill.” Ultimately, though, Birds of the World says that the “mechanics of tactilocation are not well understood.” How fascinating!

Gregarious in nature, the Roseate Spoonbill often feeds with other birds, which I discovered during a trip to Brazoria NWR after quite a bit of rain earlier this summer. Around a bend on the northern side of the Auto Tour Loop, I discovered a mixed flock of foraging wading birds — Tri-colored Heron, Little Blue Heron, Great Blue Heron, Snowy Egret, Great Egret, Roseate Spoonbill — all searching through the water across the road, water that ran from one side to the other. I distinctly remember stopping the car to watch the group feed for a few minutes before I apologetically disturbed them and drove off.

Like many other wading birds, the Roseate Spoonbill suffered significant population losses in the late 1800s due to both hunters targeting it for its feathers and hunters disrupting the nesting grounds of other species in search of feathers. Fortunately, conservationists are not as concerned about the Roseate Spoonbill now in 2021; efforts to conserve the species have resulted in great success. All About Birds reports that “the species rates a 10 out of 20 on the Continental Concern Score, which means it is not on the Partners in Flight Watch List and is a species of low conservation concern.”

Fortunately, the Roseate Spoonbill thrives along the Texas Gulf Coast all year round; you can often see these birds in both marine and freshwater habitats, both inland and near the shore, roosting, preening, flying about, and sifting their odd bill through the water at their feet. 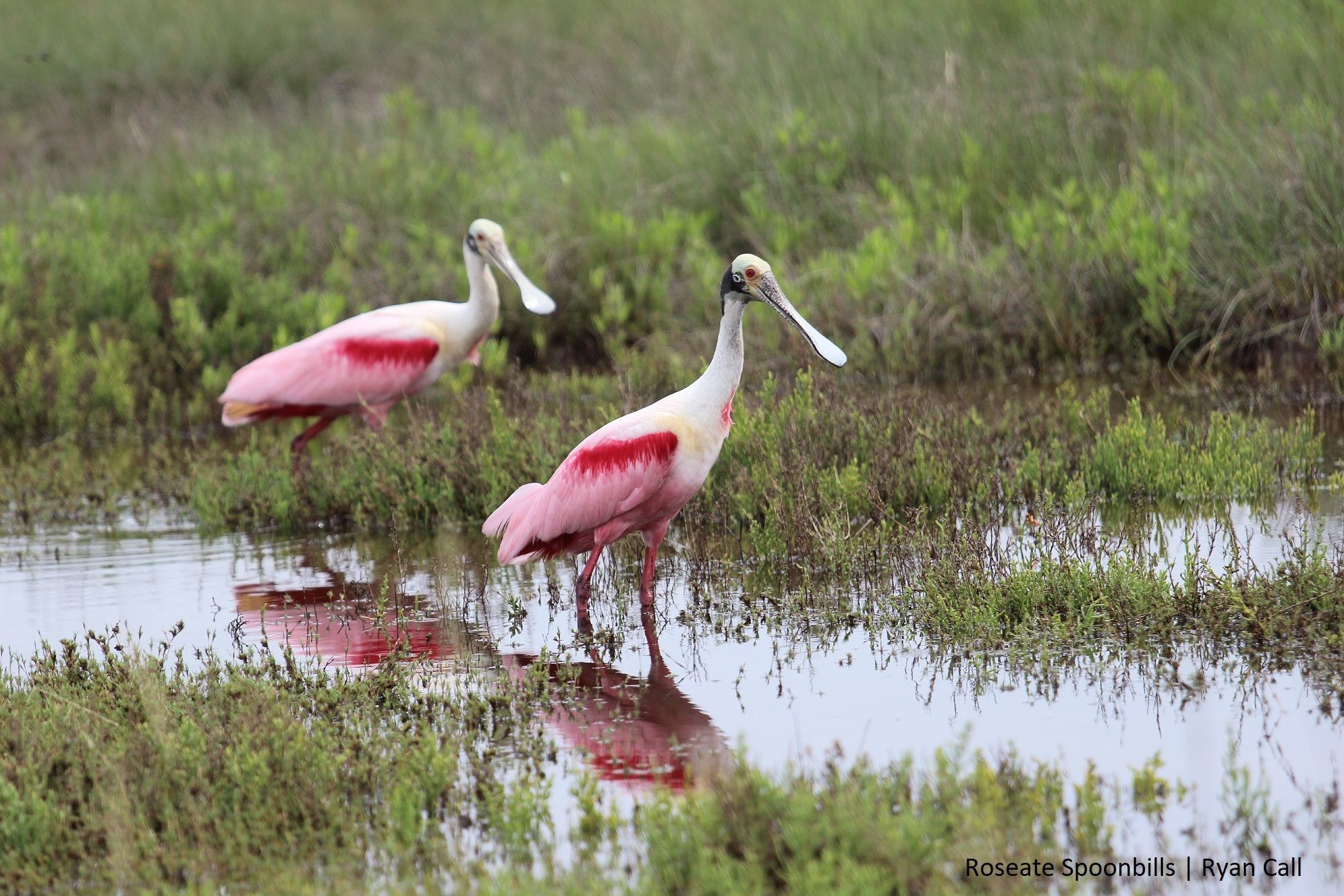 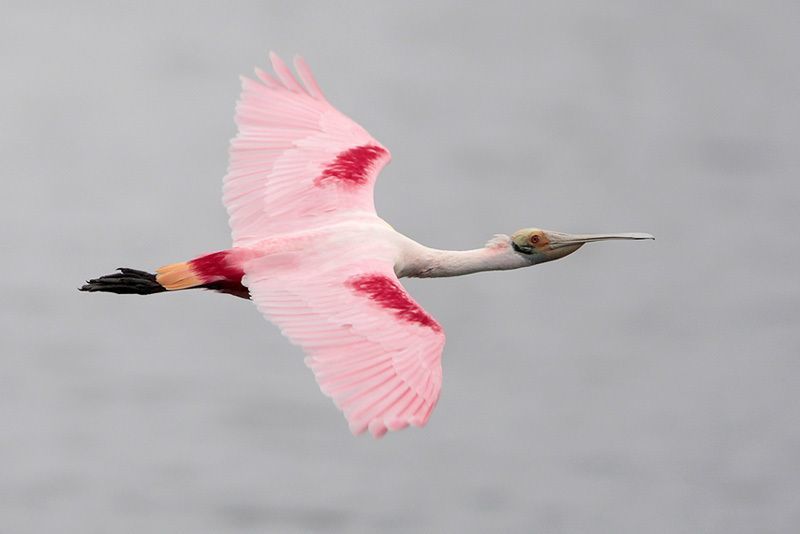 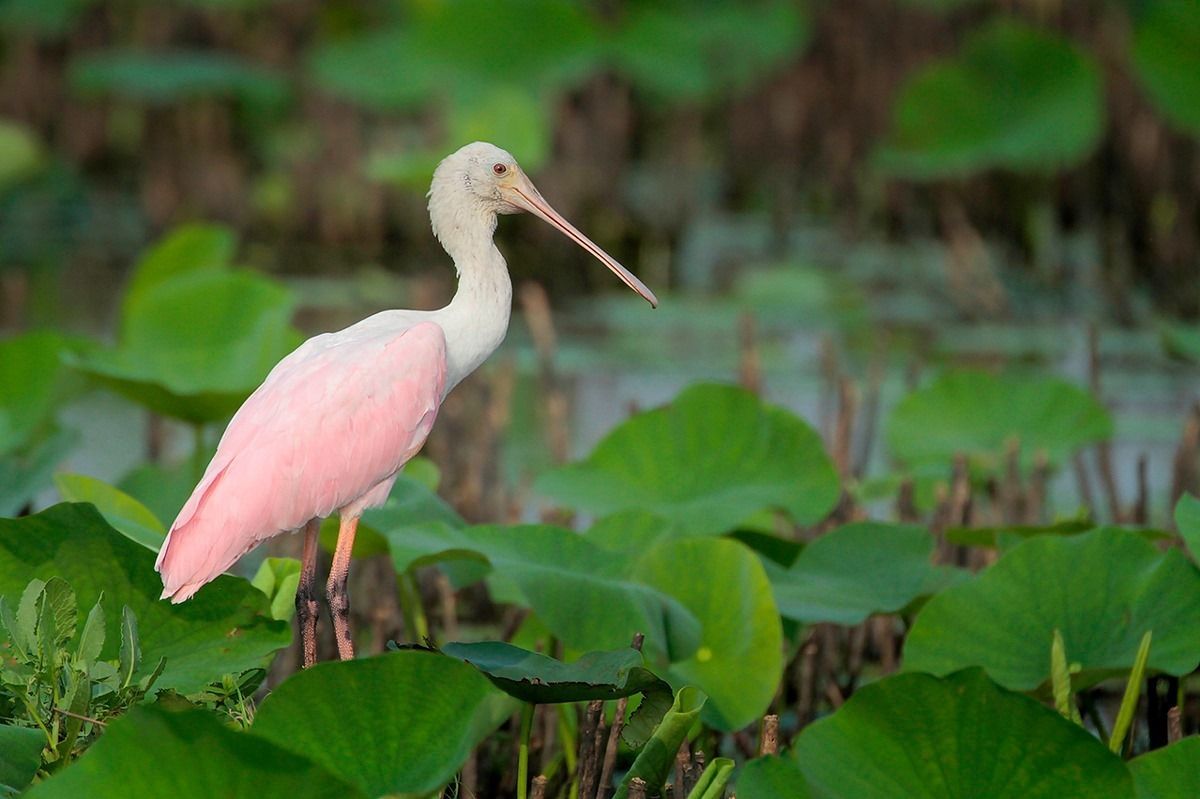 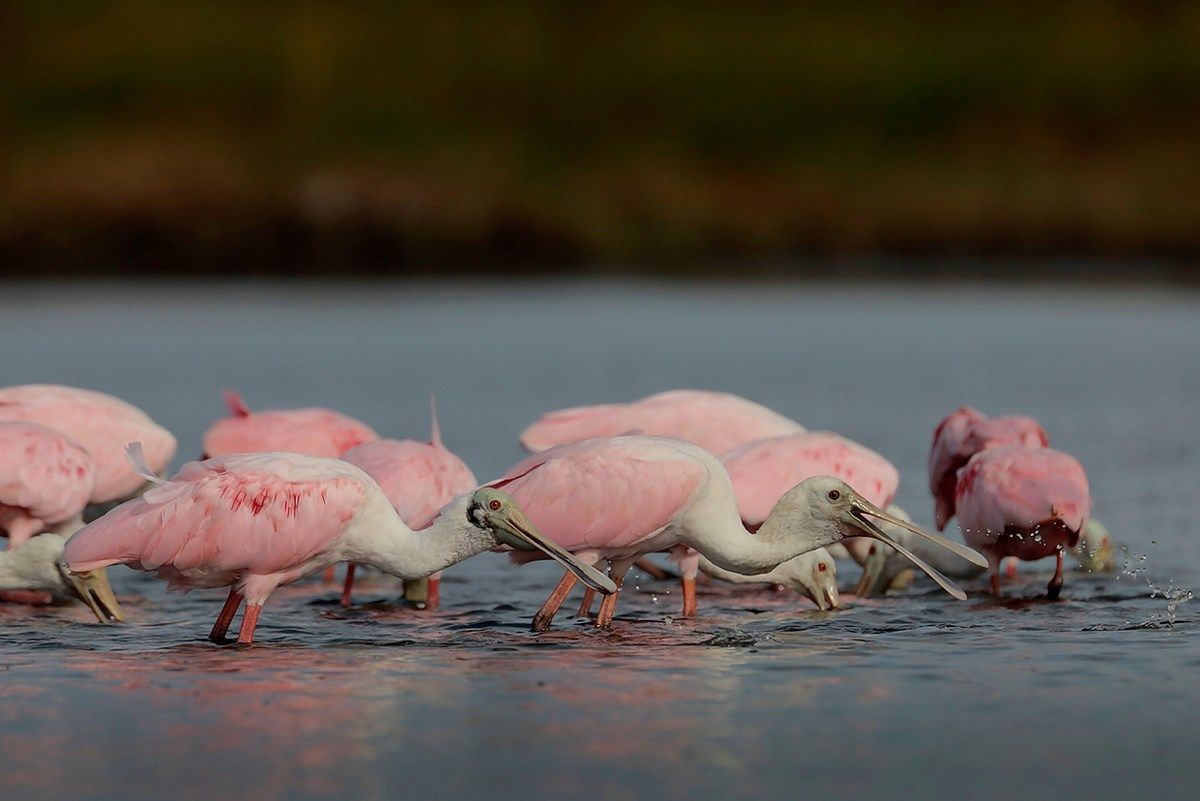