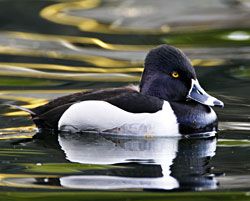 Notes: The Ring-necked Duck is a compact diving duck best identified by its distinctive tall head with a sharp peak on the rear crown. Males have dark heads, black blacks, and gray sides with a white spur at the front. Adult males have a gray bill with a prominent white ring at the base and white and black markings at the tip. Females are dark brown with a contrasting pale cheek and whitish eye ring. They have a grey bill with white and black marking at the tip. Despite their common and scientific (collaris) names, the faint burgundy ring around the base of their neck is rarely visible.

They are strong and fast fliers and are able to take flight by jumping up straight off the water, unlike other diving ducks which have to run up to take off.

Ring-necked Ducks breed on wooded lakes or ponds in the northern United States and Canada, from Alaska across southern, central and eastern Canada. They winter along the Gulf of Mexico and the southern Atlantic coast of the United States. Although their range is typically restricted to North America, vagrants are regularly reported in Central America as far south as Costa Rica, as well as occasional small flocks being reported in Scotland and Ireland. They sometimes flock with scaup or dabbling ducks. Look for them in shallow inland lakes, marshes, reservoirs or even flooded agricultural fields. 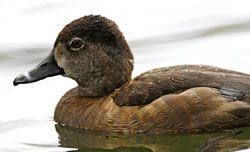