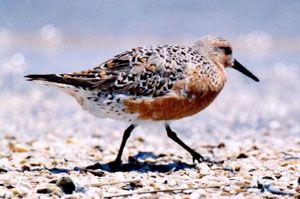 Profile by Glenn Olsen: Weighing in at only 5 ounces and about 10 inches in length, there is nothing about the Red Knot that would lead one to expect heroic actions. This bird does not have the fierce look of a hawk, the muscular, streamlined body of a Peregrine Falcon, or even the awe-inspiring presence of an owl. But what these birds do is utterly astounding!

With the aid of new light-sensitive geo-locators, some Red Knots of the rufa subspecies have been tracked through their remarkable migration route. They breed in the Canadian tundra north of the Arctic Circle, a region of rock-strewn ground, tuffs of wiry grass, scattered puddles and shallow pools that may be iced over or covered in snow when they arrive. But their amazing journey begins at the other end of the western hemisphere in Tierra Del Fuego, at the southern tip of South America.

Red Knot They spend our winter months in Tierra Del Fuego and Brazil where they fatten up on marine worms, young clams, and young mussels known as spat, in preparation for migration to breed. The first leg of their journey northward to breeding grounds is only a short flight of about 900 miles up the coast. During the long days, their insatiable appetite compels them to feed and pile on the fat. But they know they must move north, and the second leg of the journey is 1,000 miles up the coast to southern Brazil. At a national park along the Brazilian coast, they continue to eat voraciously, and by the end of their stay they will have grown plump with fat for fuel.

As optimum weight is reached, their body begins a remarkable process of preparation for migration. Their gizzards and other internal organs not needed during flight shrink, the liver and gut begin to contract, and flight muscles are well developed and primed. In small flocks they lift into the air and circle around the beach in choreographed flight a few times to calibrate their built-in GPS system, lock on to their flight route and speed northward. The target destination is Delaware Bay in New Jersey, nearly 5,000 miles away! Some birds continue to hop-skip to the north coast of Brazil and then to Canada. But the heroic ones, strike out on an exhausting marathon flight of four days and nights of non-stop flying before touchdown at Delaware Bay!

The sandy beaches and shoreline of Delaware Bay provide critical stopover habitat for the Red Knot's migration. For thousands of years the prehistoric horseshoe crab has lumbered ashore to lay eggs in the beach sand around May 20, just as the Red Knots are arriving. The knots that have survived the exhausting 5,000 mile flight are ravenous because all their fat was converted to fuel. That's for those that made it. On this grueling flight some run out of fat fuel, burn their body's protein, and perish in the ocean.

The thousands of soft, richly nutritious horseshoe crab eggs are perfect for the now shriveled and reduced digestive system of the knots that are drained of energy. Once again they feed voraciously and constantly to restore the fat burned in the flight as this is not the journey's end. Unfortunately, horseshoe crabs have been over-harvested to be used as bait for fishing. As a result, their numbers are down dramatically and in turn the number of eggs laid are also down, thus reducing the food resource of the knots. This is probably a major factor behind the dramatic decline in the population of the rufa subspecies.

During a two-week period of constant feeding, a knot can double its weight in preparation for the final leg of its marathon migration. Once flight weight is regained, a nervousness ripples through the congregation of rested and restored knots. In small flocks they lift into the air, circle around the beach in choreographed flight a few times to calibrate their built-in GPS system, lock on to their flight route and speed northward. The target destination is the Arctic tundra in northern Canada, nearly 2,000 miles away! This incredible bird is only one reason I love shorebirds. Contact me for the other 999 reasons. 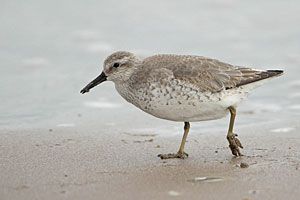