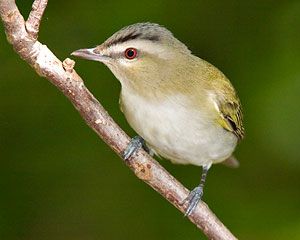 Seasonal Occurrence: Common mid-March through mid-September, with greatest numbers in the spring. Nests in our area.

Profile by Daniel Elting: The Red-eyed Vireo is a songbird with a glossy olive-green body, thick bill, and a signature red eye with a strong white eye stripe above it. Fairly unique among vireos within its range, Red-eyed vireos are frequently spotted in wooded habitat gleaning insects off the foliage of trees.

Vireos are well-known to be incessant singers during the breeding season and the Red-eyed Vireo is certainly no exception. These birds will sing from the trees of their breeding grounds from dawn until dusk; there are records of male Red-eyed Vireos that sang over 20,000 songs in one day. Songs are highly variable but consist of short, closely spaced phrases; a male Red-eyed Vireo can usually sing around 30 unique songs.

Red-eyed Vireos breed all along the Northern and Eastern forests of North America. They nest in the forks of small deciduous trees or shrubs. Females build the nest out of any small plant or animal material they can find like twigs, pine needles, or wasp nest paper. It is very common for the female to then glue together the nest parts with spider-web fragments. Although the female does the nest building, incubating, and brooding; males help by feeding the female during these times and sometimes providing nest material.

Red-eyed Vireos are long distance migrants. They spend their winters in the Amazon Basin in South America and migrate in the spring up to the Eastern U.S.; many migrate all the way to northern Canada. Red-eyed vireos are seen commonly in Texas this time of year on their way to their breeding grounds, and small numbers of them stay in Texas throughout the summer. Come to our sanctuaries and see if you can spot one of these birds and keep an ear out for a male tirelessly practicing his summer song.