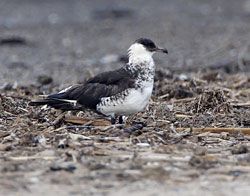 Notes by Susan Billetdeaux: Jaegers are related to gulls. The name Jaeger, which is German for "hunter", is very apt, as they often chase gulls and other seabirds for their prey. Pomarine Jaegers are larger and stockier than Laughing Gulls and are usually seen well offshore. Adults occur in two plumage variations, light and dark. Most are light-plumaged. Dark adults are all black. Juveniles have brown plumage, with the hue ranging from quite light to very dark. According to David Sarkozi, one of the best ways to find jaegers is to look for shrimp boats which are accompanied by large flocks of gulls. 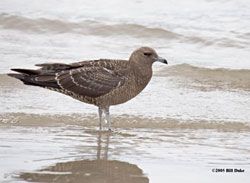 Profile by Aidan Healey: Though they spend the majority of their lives over the ocean, seabirds such as the Pomarine Jaeger occasionally get blown far inland by tropical storms. At first glance, Pomarine Jaegers may look like a rather large gull with a bulkier profile. They are powerful, direct fliers, and they use this ability to chase after and steal food from other seabirds.

Pomarine Jaegers come in two different color morphs – light and dark – of which the light morph is more common. Light morph Pomarine Jaegers are dark-backed and light-chested, with a dark cap on their head that extends over much of the face and a strong dark band across their chest. They have a long beak that is hooked at the tip, and two spoon-shaped central tail feathers that project beyond the rest of the tail. Dark morph Pomarine Jaegers have a similar bulky shape, hefty hooked bill and unique tail feathers, but they are dark even on the underside. All Pomarine Jaegers, including the dark morph, have particularly large white patches on their wingtips that appear to flash while they are in flight, which can be very useful in identifying them from a distance.

Profile by Carrie Chapin: The Pomarine Jaeger is a rare and fascinating seabird, the largest of the three jaegers. Field identification of jaegers can be difficult due to the high variation in their populations. However, Pomarine Jaegers are the most barrel-chested of the jaegers and have the most obvious “wing flash” created by the white bases of the primaries near the tip of the wings. Pomarine Jaegers also have thick bills, and adults sometimes display two long, half-twisted tail feathers. Jaegers can be separated from gulls and terns from a distance by their large size, brown appearance, and kleptoparasitic behavior against other bird species. Pomarine Jaegers will sometimes tackle and harass gulls and terns to steal their food, though they don’t rely on this strategy as much as the Parasitic Jaeger.

Pomarine Jaeger reproduction depends entirely on the availability of brown and Arctic lemmings in their Arctic breeding grounds. Reproduction is typically only successful once every three or four years and is coupled with the lemming population. However, in years with fewer lemmings, jaegers will hunt more shorebirds and eggs to compensate. Adults capture lemmings by spotting them from a perch or the air and use only their beaks to catch their prey. Pomarine Jaegers will also form foraging groups with other individuals and dig lemmings out of their burrows using their bills. Pomarine Jaegers are socially monogamous, and both parents assist with raising the young. On years with lots of lemmings, two eggs are laid in a slight depression in mid-June and hatch early-mid July. Each parent develops two brood patches on their underside and takes turns incubating the eggs. The young are fed pieces of lemming until fledging. Jaegers are nomadic when not breeding and can be found over the ocean in both the northern and southern hemispheres.

Pomarine Jaegers can occasionally be seen flying far out over the ocean from the Bolivar Flats Shorebird Sanctuary. One was recently photographed (December 2022) loafing on the beach there, so keep your binoculars focused on the ocean; eventually, you will see one of these fantastic birds! 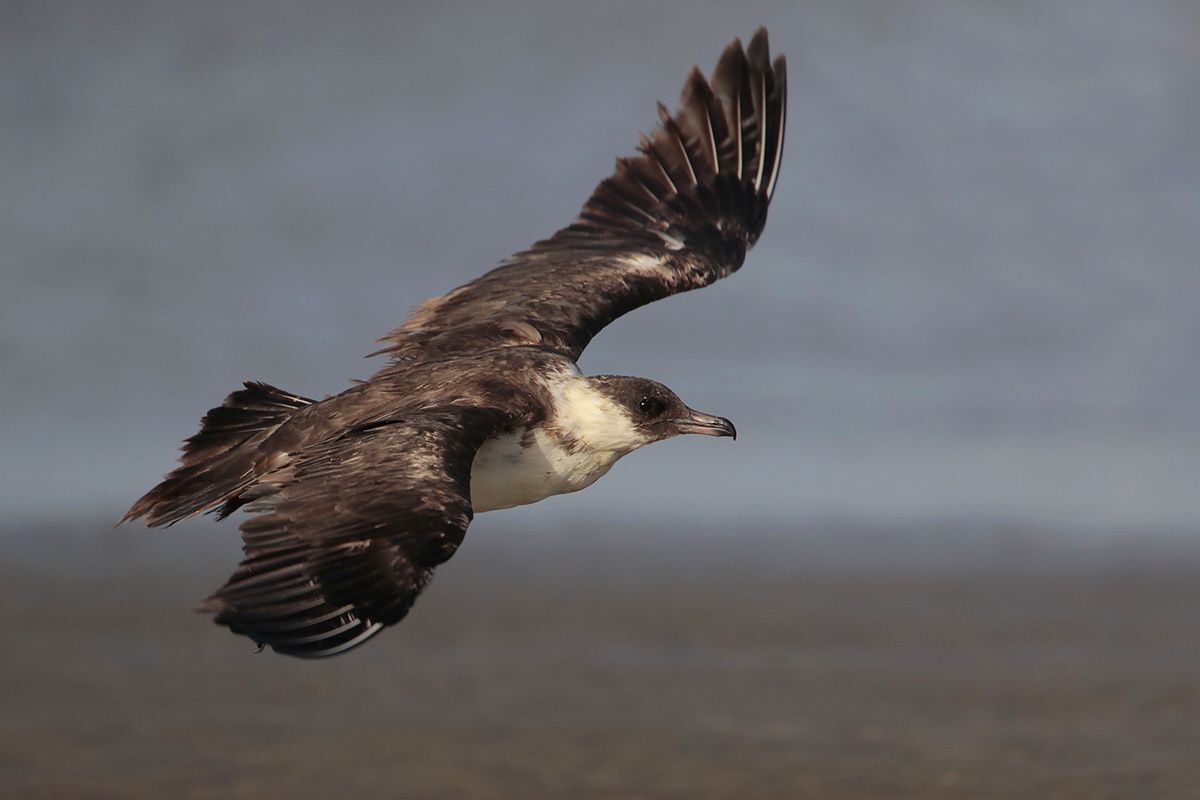 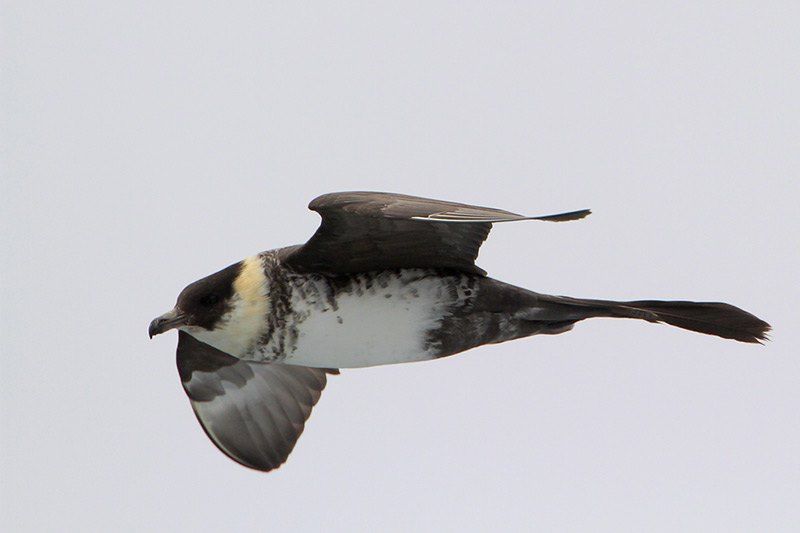 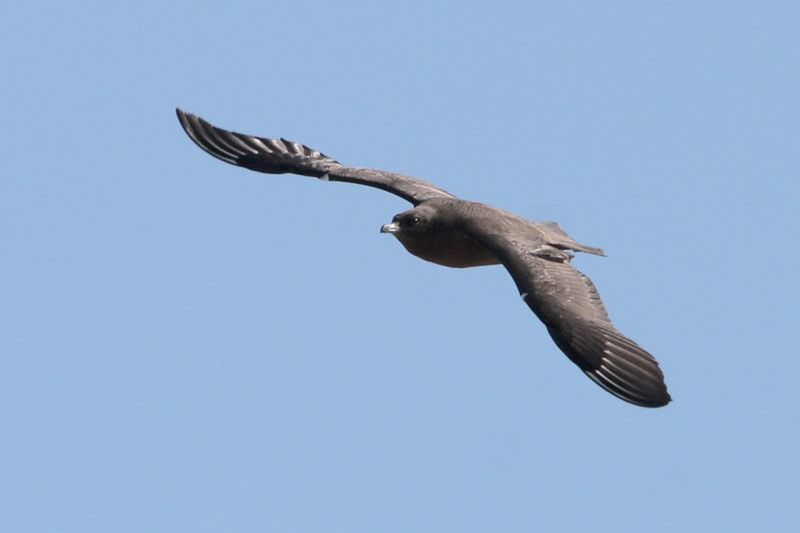 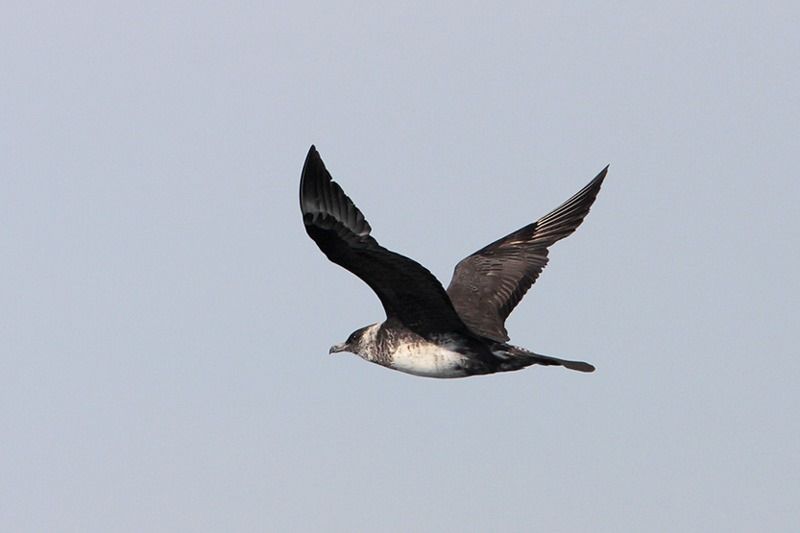 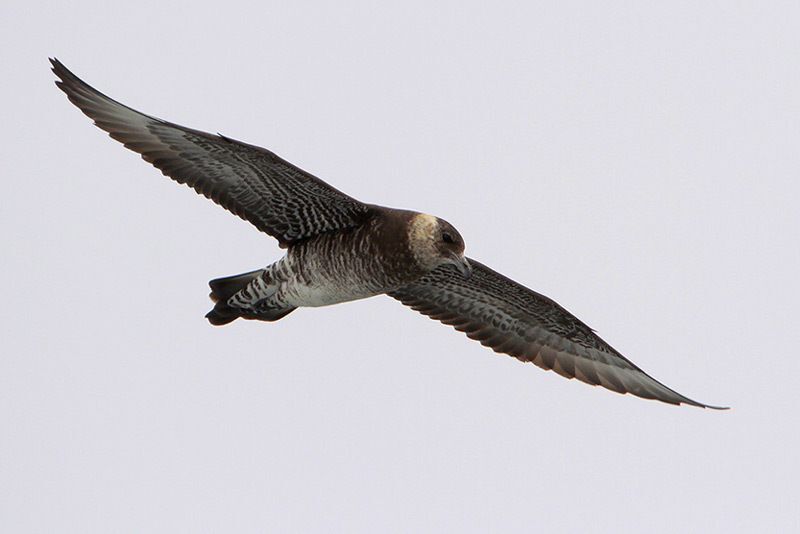