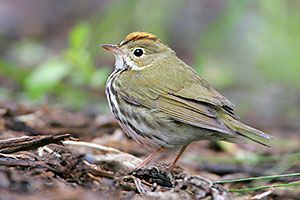 Seasonal Occurrence: Most common in spring migration (April to early May). Lesser numbers during fall migration (mid-September through October). Rare in winter.

Profile by Glenn Olsen: This beautiful warbler is often neglected and overlooked in favor of the more brightly colored warblers. Take time to find and observe an Ovenbird and you will discover the subtle beauty and distinctness of this uncommonly attractive bird. It is not your typical tree-dwelling warbler but one of the several warblers that are found primarily on the ground. Look for this bird in the understory especially where the ground is covered with leaves. In migration, it may be seen in a variety of habitats and, when spotted in the open along a trail, the distinctive color pattern of olive upperparts and white underparts with dark brown streaking and spotting makes the bird stand out. But on the breeding grounds this plumage pattern provides great camouflage for them, and they blend surprisingly well with the dappled light and drab leaf litter of deciduous forest floors.

Early April through early May is a good time to find the Ovenbird along the Upper Coast as they migrate to their breeding grounds in the northeastern and central states and Canada. In the fall, look for them from mid-September to mid-October as they are returning to their primary wintering ranges of Mexico, Central America, and the Caribbean region.

The common name of Ovenbird refers to its domed-shaped nest which is similar in appearance to a Dutch oven. The genus name, Seiurus, is derived from the Greek word meaning“to shake to and from” and refers to the way the Ovenbird sometimes quickly raises its tail and then slowly lowers it. The species name is derived from Latin and is a reference to the golden-orange crown stripe. Even the song has an interesting mnemonic of TEA-cher TEA-cher TEA-cher. In the deep, silent, north woods of Wisconsin and Michigan I have heard the sharp, bell-ringing clear song of the Ovenbird, and it was magical.

Comments by Don Verser: Ovenbirds are found walking on the ground in leaf litter normally in the larger woods. Thrush-like but easily identified by its orange crown stripe. Seldom vocalizes.