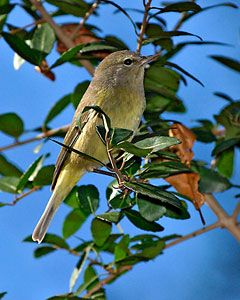 Profile by Vicki Stittleburg: The Orange-crowned Warbler causes identification problems for many birders as its drab, olive yellow appearance and lack of field marks make it resemble the females of other warbler species and the namesake orange crown patch is rarely seen. Compared with other warblers, the Orange-crowned has a noticeably thin, sharply pointed bill. It has a thin, faint, dark eye line, a bright yellow eyebrow and a broken eye ring. The undertail coverts are bright yellow and are often the brightest part of the plumage.

The Orange-crowned Warbler is one of our most common warblers in winter and one of the most frequently encountered ones in backyard gardens; however, It is often overlooked as it is well-camouflaged by its gray-green plumage and it usually forages silently and alone. Look and listen for the Orange-crowned Warbler in dense shrubbery and low trees where they glean insects from leaves. They supplement their insect diet with fruit, berries, seeds, and are common visitors at the sapwells drilled by sapsuckers and some other woodpeckers They often give a high, faint contact call while foraging.