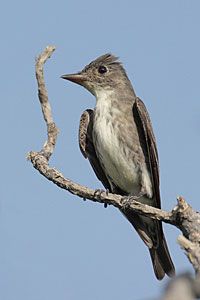 Seasonal Occurrence: Greatest numbers in May and in August through mid-October.

Profile by Glenn Olsen: Last spring I was leading a group at Boy Scout Woods, and we were looking for birds as we walked along the trail that leads to the pond. On the east side of the trail many trees had been blown down and cleared out as a result of Hurricane Rita. At the top of a dead tree in this clearing, I saw a darkish, block-headed bird, perched with an erect posture. I recognized the silhouette as a flycatcher and raised my binoculars to see an Olive-sided. “Look at this bird!” I said, but as I finished my sentence the flycatcher dropped down. We waited a little while to see if he would come back, but he did not. We walked slowly in the direction we last saw the bird, but we could not find it. This happens often.

While not rare, we only see this bird during migration and even then I only see them a few times per year. The fact that this bird is not common makes them a special joy for me to find. Several months later I had the good fortune of seeing this bird again. I was walking an old logging road in the Hiawatha National Forest of Michigan looking for Black-backed Woodpeckers. In the stillness of the forest I heard the distinctive “quick three BEERS” song of the Olive-sided Flycatcher. I began searching and soon found him, as usual, perched high in the top of a dead tree in the middle of a clearing.

I have seen this bird in the open coniferous forest of its breeding grounds. I’ve seen it in migration in the foothills of Costa Rica. Near home, I’ve seen it in the live oaks at Smith Point, and in the riparian woodlands of Jones Park, as well as at High Island. Each time I see this bird in Houston, I wonder if it is the same individual bird I saw in Michigan or Costa Rica. The chances are it’s not, but it’s possible, and this fills me with a sense of awe. I am amazed that this little bird migrates almost 4,000 miles from the mountains of South America to the boreal forests of the northern United States, and Canada and does this twice per year. In a lifetime this bird could make fifteen to twenty of these journeys.

On an early August morning go to one of the locations mentioned to see this attractive flycatcher. Look in any open woodland area. You will recognize this species by the dark gray-brown upperparts, erect posture, and white underparts with dusky gray sides that give the appearance of a well-dressed flycatcher wearing a vest perched in the top of a dead tree.

Notes by Susan Billetdeaux: Olive-sided Flycatchers have experienced serious population declines recently. They are listed as "Near Threatened" by the IUCN and are on the Audubon WatchList. Contributing causes to population declines may be deforestation in South America and loss of breeding habitat.

Comments by Don Verser: Olive-sided Flycatchers are always at the top of a tree or snag on a bare perch and use the same spots year after year. Sometimes Olive-sided can be confused with Pewees but are a bit larger with a short tail look and are extremely dark vested.