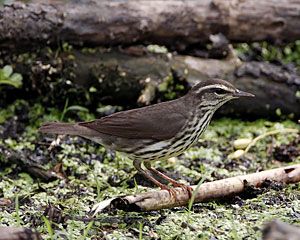 Northern Waterthrushes are ground foragers, they are often seen in wet spots near ponds or streams bobbing their tail as they feed. Their preferred diet consists of mostly insects, but they will occasionally catch arthropods and even small fish. Northern Waterthrushes are very vocal birds, they sing a loud ringing song that travels well through the dense forests of their breeding grounds.

Northern Waterthrushes breed from the northeastern forests of the United States and throughout most of Canada and Alaska. Nests are built on the ground in hollow cavities or under logs and are a small nest cup lined with fine plant stems, rootlets, and moss. Their eggs are mostly white with dark spots around the large end, clutch sizes are one to six eggs.

Northern Waterthrushes winter from Mexico down to the northern parts of South America. In the spring time they migrate through eastern North America, they are seen passing through Texas in late April to mid-May.